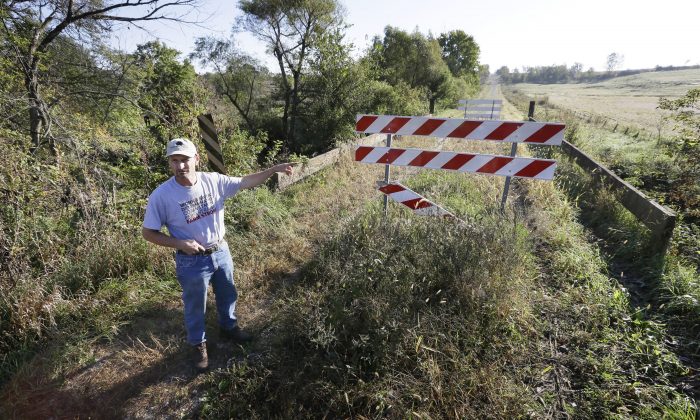 To Save Money, States Give Up on Repairing Some Rural Roads

But amid the orange traffic cones and construction signs, something surprising is happening to Iowa’s transportation system.

It’s actually getting smaller as state and county agencies quietly give up on maintaining many rural roads and bridges to spend on bigger, more essential projects in busier areas. The same pattern is playing out across the country, provoking growing fears in rural areas and elsewhere that the trade-off could make it even harder to eke out a living in many places where opportunity is already limited.

There’s only so much money, so you need to prioritize.
— David Carroll, engineer, Warren County, Iowa

“There’s only so much money, so you need to prioritize,” David Carroll, engineer for Warren County, just south of Des Moines, said of the roads and bridges built decades ago. “We’re living off our grandparents and great-grandparents right now.”

Now farmers have to drive miles out of their way to reach their fields, and once-simple errands have become cumbersome cross-country trips. In Louisiana, college students persist in using a closed bridge to get to campus, despite warnings that it could collapse.

Rural communities complain that they are being shortchanged in favor of cities.

During the last five years, Warren County has permanently closed 20 bridges over small streams, with more likely to come. Current budgets can’t possibly pay to maintain every road or bridge built over the last six decades, according to transportation officials.

“Does that mean the system is going to shrink? Yes,” said Paul Trombino, head of the Iowa Department of Transportation and president of the American Association of State Highway and Transportation Officials.

The county of 50,000 relies on farming for much of its economy. If farmers can’t haul equipment to their fields or harvested crops to market, they can’t make a living.

Duane Ohnemus and his wife, Mary Jo, raise cattle, corn, and soybeans on 1,500 acres that their family has owned for more than a century. But they are having trouble just getting around their land because of the closure of one small bridge and load limits on others.

Ohnemus must take a 4-mile detour to check on cattle or take equipment to his crops. And since the bridge closed, the remaining dirt road has not been maintained. The weight limits mean he’s tempting fate whenever he rumbles across other bridges in his three-quarter-ton pickup. When moving his tractor or combine, he has to choose routes carefully.

“They need to come up with some sort of alternative,” Ohnemus said. “You can’t hardly run a business.”

A similar situation has taken shape in King County, Washington, where more than $3 billion is being spent to replace an elevated highway in Seattle with a tunnel carrying a double-deck roadway. In unincorporated areas, officials have closed three bridges and are struggling to maintain 1,500 miles of road.

Far from Seattle’s skyscrapers, residents of the tiny mountain community of Skykomish are furious that the state and county opted not to rebuild a section of the Old Cascade Highway that washed away several years ago. Eventually, officials plan to remove the bridge and permanently close a section of the scenic road.

Residents fear that will hurt a community that relies on tourism and force more residents onto a frequently clogged highway that is now the only way to reach the town.

Mayor Tony Grider said the closure has pushed more bicyclists onto the highway, cut off homes on the other side of the bridge, and blocked the entire town for up to a half hour when one of the 20 daily trains needs to stop.

He acknowledges the need for Seattle’s massive tunnel project but said residents wonder why money is available for that project and not their bridge.

We’re asking for nickels and dimes, and we’re paying taxes like everyone else.
— Tony Grider, mayor, Skykomish, Wash.

“We’re asking for nickels and dimes, and we’re paying taxes like everyone else,” he said.

Residents contest the estimate that reconnecting the bridge would cost $19 million. But even if the bill were lower, county officials said, it would be hard to justify spending much money on a road that is typically used by only about 100 vehicles each day.

“The money isn’t there, and when things become unsafe, we’ll close them,” said Brenda Bauer, the county’s road services director.

In Lafayette, Louisiana, Public Works Director Kevin Blanchard said he’s closed three bridges. Another three are in “rough shape” and might not pass their next inspection.

One of the most troublesome closures has been a small bridge over a drainage canal that connects the University of Louisiana with student housing. The closure forces students to walk or drive an extra mile to campus, though many simply squeeze through an opening in a chain-link fence. The bridge is in such poor condition that “the whole thing could come down,” Blanchard said.

To save money, he said, agencies might consider turning some roads over to private users, no longer taking public ownership of new roads in housing subdivisions or even removing some roads.

Transportation officials have long known that state and local governments could not afford to maintain all the suburban growth that boomed after World War II, said Charles Marohn, a professional engineer who heads a Minnesota-based group called Strong Towns.

Today they must make tough choices about what to repair and what to abandon, he said. The key question is: What are they willing to pay for?

“We built the road network because that’s what we needed at the time, and it cost a whole lot of money,” said John Harvey, chairman of a transportation technology organization at the University of California–Davis. “Now we need to all be in agreement about what the future road network should do.”