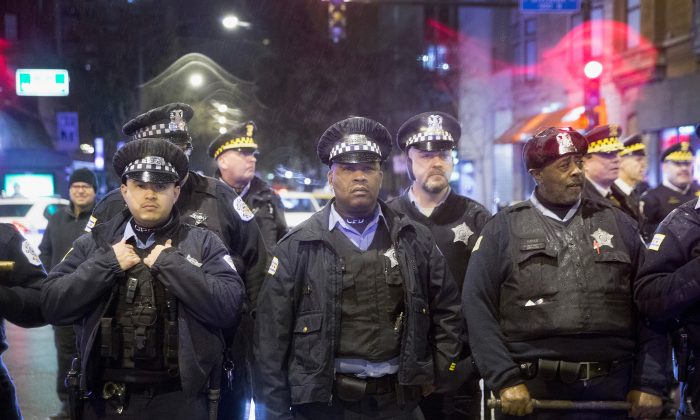 Police stand guard as demonstrators protest the death of Laquan McDonald on November 25, 2015 in Chicago, Illinois. (Scott Olson/Getty Images)
US

CHICAGO—A campaign to increase diversity in the ranks of the Chicago Police Department has resulted in a 13 percent jump in minority applicants, the department said in an announcement emphasizing its efforts to restore frayed trust with the black community.

About 70 percent of the 14,000 would-be officers in a recent pool of applicants are black, Hispanic or Asian, the department said in Monday’s news release. Recruiters visited churches, schools and community events, and the department produced ads in Spanish as well as English.

Chicago population is about 67 percent black, Hispanic, or Asian, according to the Census Bureau.

The minority recruitment drive is part of the department’s efforts to rebuild ties with the community that were badly damaged by recent cases of alleged misconduct against blacks, including the 2014 killing of a black teenager shot 16 times by a white officer. The release in November of squad car video showing that killing set off protests and triggered a federal civil rights investigation.

Mayor Rahm Emanuel has responded by promising a thorough overhaul of the police department’s leadership and the “culture” of policing in Chicago.

“To continue restoring trust between the police and communities across Chicago, we must build a police force that represents the diversity of the entire city,” Emanuel said in a news release Monday to announce the recruitment numbers.

Applicants must pass an exam, attend the Police Academy and serve as a probationary officer before becoming full-fledged officers.