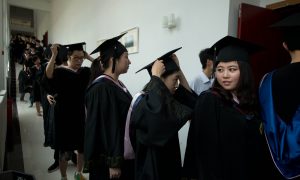 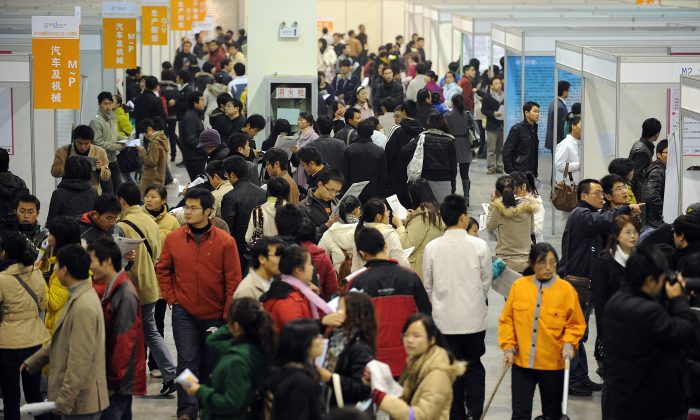 Chinese students seek jobs on offer at an employment fair in Hefei, in east China's Anhui province on Nov. 19, 2009. Students graduating from university in China sometimes only receive their degrees if they present a signed employment contract to their university; this has led to faked employment contracts, inflating the employment statistics. (AFP/AFP/Getty Images)
China

Concerned with the unemployment rates for young people in China, universities have begun forcing graduates to sign work contracts in order to receive their diplomas. On some occasions the students fake the work contracts so they can graduate and be competitive in the labor market, according to Chinese media reports.

One cause of the current unemployment among college graduates is a structural conflict in the economy, where there are no jobs suited for the areas of study that many students major in. Additionally, the graduating class of 2013 is the largest in China’s history, and the slow growth of the economy does not offer enough skilled positions overall to take on these new additions to the work force.

The problem is prominent for graduates in a wide variety of fields, including English, law, computer science and technology, accounting, international trade, and industrial and commercial administration. “The Chinese economy is in fact not moving fast in the much-discussed up-the-value-chain transformation,” writes Gordon G. Chang, a commentator on China, on Forbes.com.

Universities have begun requiring that students have signed employment contracts before they allow them to graduate—which has resulted in some students buying such documents from Taobao, a Chinese equivalent to Ebay, and then bribing local business owners to stamp them. Illegal vendors of said documents have said that with the increasing number of struggling young people in the job market, selling fake employment contracts has itself become a good line of business.

“I know it’s horrible, but I had to make sure that I would get my diploma, otherwise fours years of hard work and study would have been wasted,” said Lu, a student close to graduating, to the Global Times, a state-run newspaper, regarding her choice to purchase a fake contract for 200 yuan (about $32).

The employment offices at universities then count the fake jobs as part of that year’s graduate employment rate, resulting in an inflated number.

The official unemployment rate is 4.1 percent, but this figure has been widely criticized by private-sector economists as unreliable because there has been little fluctuation, even during economic downturns.

The percentage of Chinese students set to graduate that have signed job contracts is 52.4 percent, which is about 7 percent less than last year, according to Forbes. According to Beijing, every 1 percent decrease in GDP growth eliminates one million jobs. The declining job situation is an additional indication that China’s economy is not expanding at nearly the 7.7 percent rate that Beijing has claimed.

Xiong Bingqi, the Vice-Chancellor of the 21st Century Education Research Institute, has proposed alternate ways of measuring the official employment rate according to Education News China. Xiong advocates for entrusting reputable third-party organizations to do the calculations in order to limit falsified data.