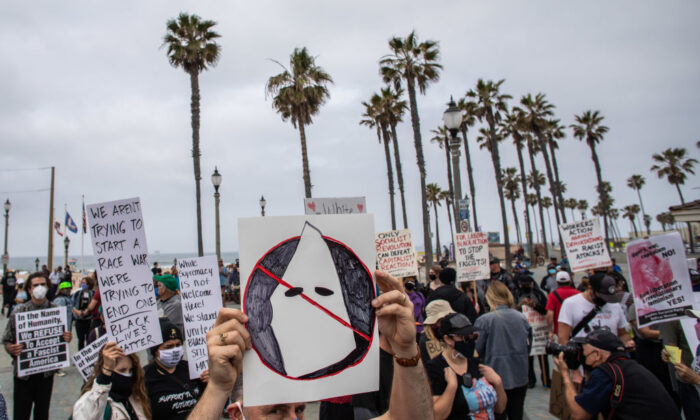 A man holds an anti-KKK sign during a protest against white supremacy in Huntington Beach, Calif., on April 11, 2021. (Apu Gomes/Getty Images)

President Joe Biden, in his address to Congress, repeated his absurd claim that white supremacism is “the greatest” threat facing the country. He then proceeded to promote the defamatory mythology solely responsible for the recent disturbing rise in white supremacism.

This truly dangerous incoherence requires a bit of unpacking, beginning with some simple definitions. What is white supremacism?

The answer is hardly subtle. It’s an ideology that combines two fundamental ideas: “whiteness” and “supremacism.” Both are rooted in the notion that humanity divides into distinct groups based upon inherent characteristics.

Supremacists believe that one group is superior to all others and thus uniquely qualified to rule. It’s an idea as old as history. Nazism, apartheid, the Ottoman millet system, and Jim Crow were 20th century supremacist systems. Today, Islamists preach Islamic supremacism, Louis Farrakhan prefers an Afro-centric supremacism, and the Chinese Communist Party is heir to a long line of Han supremacist rulers.

Whiteness stems from the belief that the proper categorization of humanity follows racial lines, and that one such category is “white.” White supremacism arises when some of those designated “white people” embrace the racial categorization, take pride in their own category, and announce that they deserve to rule.

With those definitions in place, we can look at today’s America. We’re a country without a single sizable or influential white supremacist organization. The ideology boasts no celebrity advocates, no national spokespeople, no lobbyists, and few avowed adherents. White supremacist gatherings draw more protestors and reporters than actual supremacists.

The “greatest threat” to our country? Not even close. One problem among many? Absolutely—and one worth watching. White supremacism has played a particularly dark role in American history. After having been put to rest for several decades, it’s on the upswing. It’s spreading through the fever swamps of the internet to become the ideology of choice of violent loners—including those responsible for the massacres in a Charleston church in 2015 and a Pittsburgh synagogue in 2018.

White supremacism is indeed a real and growing problem. The key questions are thus what has been fueling its recent rise, and what can we do to reverse it?

The answers should be obvious. Heightened race consciousness is the sole and entire cause for the re-emergence of a long-dormant “white” identity. Because white supremacism is possible only among those who embrace both racial categories and their own whiteness, the only effective counter to white supremacism is colorblindness.

Eric Holder, Loretta Lynch, Maxine Waters, “The Squad,” Joe Biden, and others have blessed this overt racism with government approval and support.

Their lucrative grievance industry desperately needs white supremacists. They simply can’t cast themselves as heroic in the absence of villains. Nothing could be worse for business than the colorblind America we were on the verge of achieving until quite recently. White supremacists are absolutely critical as the designated villains in their morality play. They need them, they want them, they created them, and they revel in the aura of heroism their monstrous creation has allowed them to fabricate.

It’s the sort of plot that superhero fiction has taught us to associate with a Lex Luthor—except that it’s all too real. If you want to identify the greatest internal threat facing America, look past the white supremacists to the critical race theorists who created them.

Sen. Tim Scott (R-S.C.) got it exactly right. Whatever the United States may have been in the past, it entered the 21st century as the most colorblind, least racially categorized society in world history. Our unified response to 9/11 made it clear. We came together as a single nation to confront a foreign enemy. That response may have sharpened the distinctions between Americans and foreigners, but it obliterated the distinctions among Americans.

When that colorblind American identity led us to inaugurate our first black president, the panicked race grifters fought back. They reimposed racial categorization, triggered racial tensions, revived a moribund white supremacism, and reignited their grievance business.

The only way to fight white supremacism is to fight critical race theory. These racists need each other. Otherwise, they’d have to ask themselves a classic leftist question: What if they declared a race war and no one showed up?

I stand with Sen. Scott calling for a colorblind America. President Biden stands against us, calling for increased race consciousness and racial categorization.

Who do you think is to blame for white supremacy?

Bruce Abramson
Bruce Abramson, Ph.D., J.D., is a senior fellow and director of the American Center for Education and Knowledge (ACEK). He is the author of five books, most recently “The New Civil War: Exposing Elites, Fighting Utopian Leftism, and Restoring America” (RealClear Publishing, 2021).