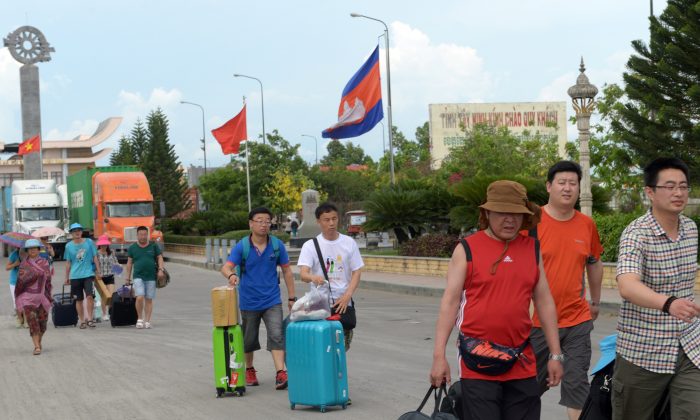 China Uncensored: To Chinese in Vietnam – ‘Fend for Yourselves’

Now is not a good time to be Chinese in Vietnam. Or even Taiwanese, Malaysian, or Japanese, because you might be mistaken for a Chinese person from China.

At the beginning of May, one of China’s state-run oil companies (CNOOC) moved an oil rig into disputed territorial waters around a group of uninhabited islands in the South China Sea.

No, not the Diaoyu/Senkaku Islands. Those are a group of uninhabited islands in the East China Sea that China is in a territorial dispute with Japan over.

These are the Paracel Islands, otherwise known as Xisha Islands in Chinese or Hoàng Sa Archipelago in Vietnamese. I guess being in the middle of a territorial dispute makes it hard to agree on a name.

Following the announcement, a wave of anti-Chinese protests erupted in Vietnam. At first, they were supported by the Vietnamese government, but then things turned violent. Six Chinese workers were killed and over 100 were injured.

It got so bad that even Malaysian, Taiwanese, and Japanese companies were attacked, possibly because people thought they were Chinese. Taiwanese factories were hit particularly hard. Two hundred have reported damage.

The Vietnamese government didn’t exactly do too much to contain the violence. On May 15, the Vietnamese prime minister sent a text message to the population of Vietnam asking people not to engage in violence, but still “defend the fatherland’s sacred sovereignty.” Seems like a little bit of a mixed message there. And, by the way, who decides when it’s a fatherland and when it’s a motherland?

So things were getting pretty bad for mainland Chinese workers in Vietnam. So what did the Chinese authorities do to protect its people? Well, first they told state-run media to not even mention it.  According to China Digital Times, these censorship instructions were sent out to media throughout China:

“Absolutely do not report on any news related to ‘Chinese-funded enterprises in Vietnam being attacked by Vietnamese.’ Do not republish foreign coverage. Stringently find and delete related news, commentary, and images on interactive [Web] platforms.” (image copied here, towards middle)

It wasn’t until May 15, that CCTV finally broke the story. On Weibo, a microblog site. Two days late.

But meanwhile, for those Chinese nationals surrounded by angry Vietnamese, well, they were on their own. According to one Weibo post, that was quickly censored, “The Vietnamese have gone crazy, we called the embassy and Foreign Ministry, they all told us to protect ourselves and mind our safety. How are we supposed to protect ourselves, I don’t have return tickets, there are no seats until the 18th. I hope the government can seriously pay attention to this.”

Not that it really mattered that he couldn’t get a seat until the 18th. Because according to the same Weibo user, to help fellow citizens in a time of need, China Southern Airlines jacked up the prices:

“How many fellow Chinese countrymen are living in danger, how many are hiding for their lives. Before, a one-way flight to Guangzhou is around 2,000 yuan, in a day that jumped to 4,000 yuan. Are you still human? Do you have any conscience? Are you getting rich off a national disaster? How can you face fellow countrymen in Vietnam? We’ve got no money left after being robbed by the Vietnamese animals, how are we supposed to look after ourselves? Is this how our corporations treat our own people?”

By then, Taiwan had already sent in extra planes at normal prices. Of course that whole, reporting-late-and-not-helping thing kind of looks bad for the Chinese authorities, and so state-run media put out some big splashy headlines about sending in boats to get people out of there, and that over 3,000 people have been evacuated. That number was plastered around a lot of Western media outlets as well.

Which is all well and good, until you realize all of those people were just employees of one very rich, very powerful, state-owned Chinese company, the China Metallurgical Group.

What about everyone else? Well, as Weibo user MJyellow said, “We saw CCTV report that the embassy had sent ships to bring people back to China. So my friend called the embassy. They said the ship is for workers of so and so factory, and we should find our own way back. My friend said it might not be safe. The embassy said if you’re scared then don’t go back.”

So the message the Chinese authorities are putting out there seems to be clear: If you’re mainland Chinese in Vietnam, sorry, you’re on your own.