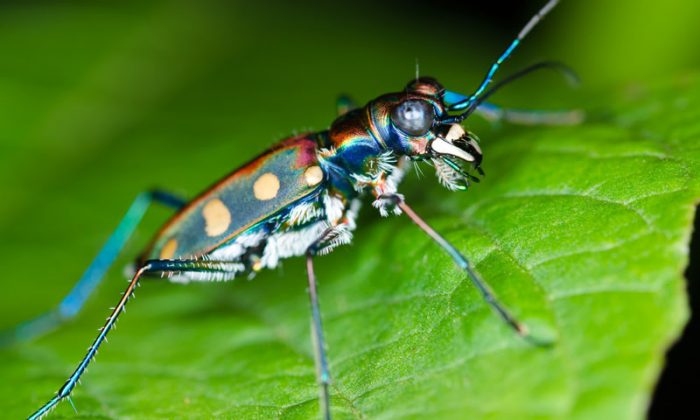 "The idea is to find laws that animals use to intercept their prey," says Jane Wang. "Since insects have a smaller number of neurons, their behaviors are more likely hardwired, which makes it possible for us to find and understand the rules they follow." (Shutterstock*)
Science

To Chase Prey, Tiger Beetles Do a Superfast Dance

If a tiger beetle drew a line as it chased its next meal, the resulting pattern would be a tangled mess. But there’s method to the mess, researchers say.

Tiger beetles, known for their speed and agility, do an optimal reorientation dance as they chase prey at blinding speeds, says Jane Wang, professor of mechanical engineering and physics at Cornell University, who tries to find simple physical explanations for complex, hardwired animal behaviors.

This visual representation shows a tracked tiger beetle’s trajectories as it chases prey. By observing a beetle’s chase, scientists have derived a physical law that it follows to optimize its predation strategies. (Jane Wang/Cornell University)

For a new study published online in the Journal of the Royal Society Interface, Wang and colleagues used high-speed cameras and statistical analysis to reveal a proportional control law in which the angular position of prey, relative to the beetle’s body axis, drives the beetle’s angular velocity with a delay of 28 milliseconds. That’s about a half-stride in beetle terms.

These observations led Wang to propose a physical interpretation of the behavior: that to turn toward its prey, the beetle, on average, exerts a sideways force proportional to the prey’s angular position, measured a half-stride earlier.

“The idea is to find laws that animals use to intercept their prey,” Wang says. “We do it, too (interception)—when trying to catch a baseball, or when chasing someone. But since insects have a smaller number of neurons, their behaviors are more likely hardwired, which makes it possible for us to find and understand the rules they follow.”

Why the tiger beetle? It’s a nice model system, Wang says, which she learned after attending a talk several years ago by entomology professor Cole Gilbert, who studies neural mechanisms of behavior in arthropods and is a coauthor of the new paper.

For the experiments, a “dummy prey”—a black bead—was dangled in front of the beetle, which, mistaking the bead for a meal, would give chase. Its chasing patterns were recorded with a high-speed camera.

From an evolutionary point of view, the sensing and moving are intimately connected. Some of the hundreds of thousands of neurons that function for sight are directly connected to the machinery for locomotion, which is directly related to the animal’s instinct to survive—that is, eat. Thus, studying how animals move can provide insight into how they sense their environment, and vice versa, Wang says.

Andreas Haselsteiner, a visiting student in Wang’s lab, is the first author of the study and designed the experiments.

*Image of “tiger beetle” via Shutterstock