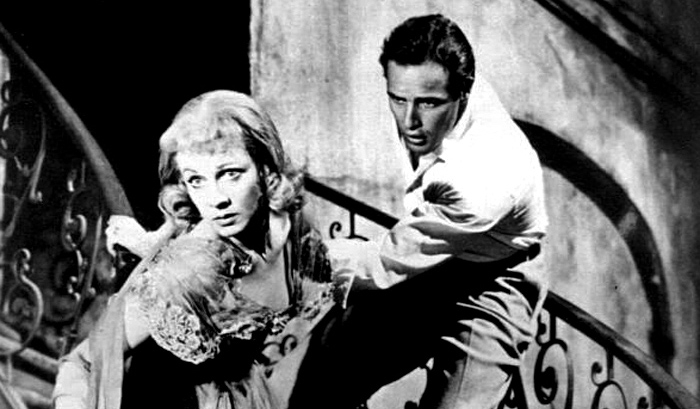 To Breen or Not to Breen: ‘A Streetcar Named Desire’ From 1951

“To breen or not to breen? That is the question.” I beg your pardon for beginning this film-based article by misquoting William Shakespeare’s “Hamlet.” Replacing the verb in this quote is a very hackneyed witticism, yet it suits this article’s purpose very nicely. What is the definition of “to breen,” you ask? “Breening” or “Joebreening” is a verb coined by “Variety” in the 1930s to describe an important yet underappreciated step in the filmmaking process during Hollywood’s Studio Era.

If you’ve read my other articles, you probably are familiar with my main focus, the Motion Picture Production Code. Its best days were the first twenty years (1934-1954) after the Production Code Administration (PCA) was formed to enforce it. Joseph I. Breen was the PCA’s leader during its heyday, which ended with his retirement. Even “Variety” noted that Joe Breen was the guiding spirit behind Hollywood’s moral self-regulation by naming the PCA’s unique yet highly effective method of enforcing the Code in his honor.

In 1968, the Code was replaced with the modern rating system, enforced by the Classification and Rating Administration. Today, fifty-two years later, the Code, the PCA, and Joseph Breen are rarely mentioned except to ridicule. Film historians are especially quick to cite the Code as the reason why classic films don’t live up to modern “values” and expectations. The only positive thing people ever say is that the Code “forced” filmmakers to be creative in attempts to “get around” it. However, the Code is rarely given credit for helping make many stories into better films than they would have been without it. This can be a very interesting subject for study, exploration, and debate. I call this series “To Breen or Not to Breen,” and its purpose is to determine whether some films might not have been better because of breening. The first film I’m reviewing in this series is “A Streetcar Named Desire” from 1951.

Starring Vivien Leigh and Marlon Brando, this Elia Kazan picture won four Academy Awards and received eight more Oscar nominations. It is still regarded as one of the greatest classic films, ranking as No. 47 on the American Film Institute’s (AFI) The 100 Greatest American Films of All Time. The PCA had a big role in its production, since Tennessee Williams’s play of the same name was not the stuff of which Code films are made. The process of breening this story into an acceptable film was long and difficult.

The film begins when Blanche DuBois (Leigh), an English teacher from Auriol, Mississippi, arrives suddenly in New Orleans to visit her sister, Stella (Kim Hunter). Blanche is clearly approaching middle age but fighting to hide it. She is appalled by Stella’s meager living conditions and brutish husband, Stanley Kowalski (Brando). Shaken by recently losing their family estate, Blanche struggles to maintain her illusions of being a young lady while entertaining a new beau in Stanley’s friend Harold “Mitch” Mitchell (Karl Malden). As Blanche’s stay at the decrepit flat wears on indefinitely, Stanley starts unraveling her deceptions.

The PCA kept all its correspondence with the studios on file, now preserved by the Margaret Herrick Library. Around five hundred files are viewable online. While the file for “A Streetcar Named Desire” isn’t included in the digital collection, the AFI’s page on this film summarizes its self-regulation. The PCA isolated three main problems with the play: Blanche’s nymphomania, her late husband’s perversion, and Stanley’s raping her near the end of the story, leading to her complete descent into madness. Her constant, immoderate drinking was another problem. Rather than eliminating these elements entirely, altering the fundamental story, the PCA suggested subtle alterations which shifted the focus to Blanche’s increasing mental illness.

The breening process emphasized Blanche’s personal losses and how her inability to accept them shaped her troubled life and mind. Instead of being driven by excessive lust, Blanche’s relationships with men are driven by her search for her late husband, Allan, and their happiness together. She is attracted to younger men and denies aging because she still believes she is a sixteen-year-old girl, married to her sensitive boy poet. This impression was heightened by her frequent calls of, “Allan!” Although she often drinks in the film, she never acts intoxicated. Her strange behavior always seems like delirium rather than drunkenness.

The only completely taboo topic tackled by the story involved Blanche’s husband, who died many years earlier. Blanche describes Allan as “just a boy when I was a very young girl.” Her explanation of discovering love in the film uses the play’s exact dialogue. The only differences are in the description of Allan himself, which was altered slightly to give a vastly different meaning. In the film, she tells Mitch, “There was something about the boy, a nervousness, a tenderness, an uncertainty that I didn’t understand. I didn’t understand why this boy who wrote poetry didn’t seem able to do anything else. Lost every job.” This misunderstood poet is described very differently than Allan in the play: “There was something different about the boy, a nervousness, a softness and tenderness which wasn’t like a man’s, although he wasn’t the least bit effeminate looking—still—that thing was there.” The implications in this statement are confirmed later in the dialogue, when she describes his suicide. The play had Allan shoot himself after Blanche revealed her disgust at finding him with another man. In the movie, he was driven to suicide when she told him, “’You’re weak. I’ve lost respect for you. I despise you.’”

The Code did not expressly forbid rape, as it did perversion. Section II, Article 3 of the Code, titled Seduction and Rape, says that these subjects “should never be more than suggested, and then only when essential for the plot. They must never be shown by explicit method.” In the play, a slightly drunk Stanley tells Blanche, “We’ve had this date with each other from the beginning!” before forcing her onto the bed as the scene ends. The film deleted Stanley’s last line and instead ended the scene with Blanche’s smashing a mirror while trying to defend herself. The inclusion of the broken mirror is extremely important, since it’s the key to the PCA’s whole response to this difficult issue.

Rather than have the leading man, such as he is, commit the horrible offense of taking advantage of his slightly deranged sister-in-law, Joe Breen suggested that Blanche should imagine the whole thing. Now, one doesn’t immediately realize this to be the case when watching the film. The scene seems quite real. However, Stanley denies having laid a finger on her the next day, when Blanche is acting more deluded than ever before. Also, no one else witnessed their interaction, since they were alone in the apartment. Shortly before Stanley’s entrance, Blanche was dancing around and conversing with someone who wasn’t there, so it’s not hard to believe that she could have imagined the whole situation with Stanley. The biggest clue, however, is the mirror. When fighting Stanley off, Blanche dramatically smashes it. However, if you look closely in the next scene, you’ll see that the mirror is still on the wall, completely intact. This subtle detail proves that Mr. Breen’s preferred interpretation of this scene is not just an alternate explanation but the only plausible interpretation of the scene.

How would this movie have been different if it hadn’t been breened? For starters, it would have contained the casual profanity used in the play, which couldn’t have made Stanley and his cohorts rougher but seemed out of place for Blanche. A few passages of dialogue were cut short, the more blatantly amorous or brutal details being left on Broadway. Besides the parts which were removed, changed, or added for breening, most of the screenplay was identical to Tennessee Williams’s Pulitzer Prize-winning script. The only other changes were made to expand the locations beyond the Kowalski apartment, where the whole play took place.

Interestingly, although the play had to be “toned down” from the original source material for the screen, the PCA was not responsible for a shortened version which was released in 1951. In 1993, Warner Bros. released an extended version of the film, containing three to four minutes of footage from various scenes which were not included in the 1951 release. These cuts were required by the Legion of Decency for “Streetcar” to avoid being condemned and thus off-limits to Catholic viewers. They included seemingly insignificant deletions of lines, close-ups, and even musical interludes which the Legion considered too suggestive. This is the sort of post-production censorship which gives 1950s moral guardians a bad name. However, the PCA approved the film as fully breened before these deletions were made.

Breening gave this story deeper symbolism. Blanche feels trapped, misunderstood, and even afraid around Stanley. He represents everything she hates but that she fears will dominate her life from now on, replacing magic and beauty with brutality and commonness. He robs her of her illusions, so she believes he physically takes advantage of her. Even this is one final self-deception, since she imagines that he desires her. Although Stanley is innocent, the film ends with his possibly losing Stella, since Blanche’s presence made her sister see how cruel and brutal he truly is. Unlike the play, the film punishes bad behavior.

By considering what changes were made from the original material, how difficult topics were presented, and the quality of the end result, we may determine whether breening improved or detracted from this movie’s quality. Based on this film, what is your vote: to breen or not to breen?