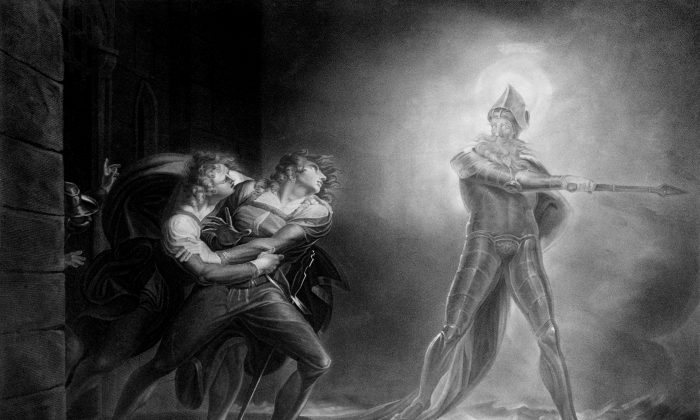 Hamlet, Horatio, Marcellus, and the Ghost, on platform before the Palace of Elsinor; from "Hamlet, Prince of Denmark," Act I, Scene IV by Henry Fuseli, on Sept. 29, 1796, after a 1789 painting by Kaufmann. (Library of Congress)
Opinion

To Be, or Not to Be: A Question for Modern China

“To be, or not to be: that is the question.” This is the most famous line in all of English literature. Yet, it also has everything to do with modern China. Are you surprised? I will explain.

The line comes from a soliloquy in William Shakespeare’s “Hamlet, Prince of Denmark.” Prince Hamlet is in a hard situation when he utters this famous line. As the story tells us, his father, King Hamlet, has died mysteriously. His uncle, Claudius, soon takes the throne and announces that a venomous snake killed the old king. But Prince Hamlet has always suspected his uncle for his father’s death.

Then the spirit of his father comes and tells him that his uncle murdered him during his sleep in the garden. Prince Hamlet is furious when he hears this, and is about to set out for revenge. But how is he going to do it? Everyone believes Claudius’s lies, as the spirit of Hamlet’s father says in the story, “So the whole ear of Denmark is by a forged process of my death rankly abused,” and some words from a ghost won’t be able to overthrow these lies. If Hamlet puts himself against Claudius, that is to put himself against everyone in Denmark.

Since it was first performed around 1602, Hamlet has become a foundational text in English literature and Western culture. At the play’s core is this universal struggle to take action: to rise to the occasion when all odds are against you and do what is right even when it puts every fiber of your being to the test. Today, this timeless theme is seen perhaps nowhere more clearly than in modern China.

There are many disenfranchised groups in China today: democracy activists, Tibetans, and Christians, but also bloggers, lawyers, and businessmen. Falun Dafa, also known as Falun Gong, is another of these groups. Falun Gong is a peaceful Chinese spiritual discipline that has five meditation exercises, and teaches people to conduct themselves according to truthfulness, compassion, and tolerance. Practitioners report improvements in health and morals and all the discipline’s teachings and books are free online. After Falun Gong dramatically grew in popularity in the 1990s, in July 1999, China’s leader Jiang Zemin launched a campaign of persecution against it.

There were about 100 million people practicing Falun Gong in China, which was more than the members of the Chinese Communist Party (CCP)—the only political party of China with any real power. Seeing Falun Gong as a threat to his power, leader Jiang ordered the persecution. The Chinese government started to arrest Falun Gong practitioners and send them to jails and labor camps. Thousands have been killed and many millions imprisoned, brainwashed, and tortured by authorities in China, as confirmed by the U.S. State Department, Amnesty International, and Freedom House. While Jiang is no longer officially in power (he and his faction still exercise control), his policy of persecuting Falun Gong continues today.

All people in Denmark must listen to and obey Claudius because he is their king. Similarly, the people of China have been forced to listen to and obey Jiang, the CCP, and their state-controlled media. While Claudius lied about the king being bitten by a snake, the Chinese media make up lies slandering Falun Gong and its founder, Li Hongzhi. They broadcast false and ridiculous reports alleging that people got serious health problems or became mentally ill and killed their family members after practicing Falun Gong.

Editorial: Xi Jinping’s Choice and the Future of the Chinese People

After seeing a play directed by Hamlet in the palace, his uncle, Claudius, realizes that Hamlet has somehow heard about the truth so he starts to plot against Hamlet. Rosencrantz and Guildenstern, old friends of Hamlet, don’t know the truth and follow Claudius’s orders. Claudius tells them, “I like [Hamlet] not; nor stands it safe with us to let his madness range. Therefore prepare you; I your commission will forthwith dispatch, and he to England shall along with you.” Guildenstern dutifully replies, “We will ourselves provide: most holy and religious fear it is to keep those many, many bodies safe that live and feed upon your majesty,” basically meaning, “We’ll do whatever you want since the whole country depends on you.”

Therefore, Rosencrantz and Guildenstern set out to bring Hamlet to England where Hamlet is to be executed by the English king. Similarly, the CCP’s lies make the Chinese people ignorant of the truth and they blindly help the Chinese government abuse Falun Gong practitioners. According to one practitioner’s account, “Poisoned by the CCP’s propaganda, these government officials thought that all Falun Gong practitioners were like what they saw on TV and so they beat us with great hatred. They forbade us to speak and beat us with three iron-core leather police batons covered with spikes. Two of the batons were broken as a result of the beating.”

Ignorant of the truth, our heroes’ fellow Chinese and Danish countrymen turn against them. Thus, Hamlet’s  storyline comes alive once again: crimes covered up with lies, the dirty secrets of a nation’s leader veiled, and an entire nation deceived!

To be, or not to be—that is the question:—
Whether ’tis nobler in the mind to suffer
The slings and arrows of outrageous fortune
Or to take arms against a sea of troubles,
And by opposing end them?

Scholars still debate if Hamlet means suicide here or attempting to slay the evil king, quite possibly resulting in his own death—both thoughts are contemplated more straightforwardly earlier in the play. In either case, it is a question of action. This is the purest crystallization of Hamlet’s plight. He faces the most daunting challenge of his life—slings and arrows, outrageous fortune, a sea of troubles—and must at this moment contemplate how to act nobly.

The biting reality of this universal question manifests itself clearly among Falun Gong practitioners, who must decide, “To be or not to be Falun Gong practitioners.” Many have made the bold choice “to be.” How incredibly difficult must this answer be? First, this means they choose not to give up a peaceful spiritual practice in the face of vast communist intimidation that infiltrates their own families, workplaces, and communities. Second, they choose to actively and peacefully debunk the CCP’s propaganda, risking labor camp sentences, torture, and death.

Since Falun Gong was banned in 1999, Falun Gong practitioners have been at a crossroads not unlike Hamlet’s. The stage is nothing less than the entire world: the crime takes place in China—the world’s largest nation, number two economy, and most ancient continuous civilization—and China’s two largest trading partners, the United States and the European Union are also implicated. All of us are characters: witnesses, antagonists, or those few who are our protagonist’s helpers, like Horatio.

Certainly, we might draw the parallels above to a dozen other causes and tragedies today in the West or East. Also, there are clear differences, such as Hamlet’s accidental killing of Polonius—Falun Gong practitioners are non-violent. But the vast differences here should be instructive, not diminishing. Spanning 400 years and the entire breadth of human civilization, the story that is alive both in Hamlet and the modern lives of good people disenfranchised in China illuminates one of the world’s most pressing issues, freedom in China, and acts as a wakeup call for all of us. The play is on. Villains walk the stage as do heroes. Which role do you play?

Tinghong Su and Evan Mantyk are a student and teacher, respectively, at one of the few fully bilingual, English-Chinese high schools in the United States, Fei Tian Academy of the Arts in Upstate New York.