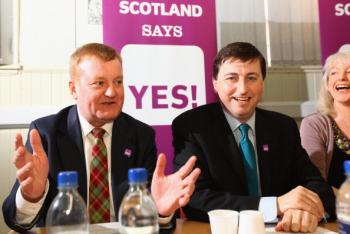 Charles Kennedy Liberal Democrat MP, and Douglas Alexander Labour MP, attend the launch of the fairer votes campaign on April 1, 2011 in Glasgow, Scotland. Activists are campaigning for an alternative to replace the first past the post voting system in the referendum on May the 5th, the same day as the Scottish Election. (Jeff J Mitchell/Getty Images)
US

ANALYSIS: To AV or not to AV

By Louis Makiello
Print
The vote on the vote is drawing nearer. On May 5th, Britain’s second-ever nationwide referendum will be held, with the public choosing whether to adopt alternative voting (AV), also known as instant run-off voting, in general elections.

With the government coalition partners fighting campaigns from opposing corners, with the Labour Party split in half, and with academics arguing that tactical voting would occur, it is clearly a complex issue steeped in party politics. But what exactly will the British public be voting for or against?

The AV system is currently in use only in Australia, Papua New Guinea, and Fiji.

May 5th coincides with local, Scottish, and Welsh elections and was chosen in the hope of averting low turnout for the referendum, which would render a "yes" victory invalid.

In the current First Past The Post (FPTP) system, the candidate with the most votes wins the election in his or her constituency. Although it has been in use for more than a hundred years, there are several problems with this system. Not least that a party with a substantial share of the vote can find itself without a single MP if its vote is spread over a large area.

This phenomenon can lead to the practice of "gerrymandering" in which constituency boundaries are set in order give an advantage or disadvantage to a certain party. In the UK, boundaries are drawn up by four different Boundaries Commissions, which are supposed to be independent and impartial. The Boundaries Commission for England is headed by the Speaker of the House of Commons, who is currently the Conservative John Bercrow.

A fully proportional voting system is one in which the number of MPs for a certain party reflects the number of votes cast for that party. Like FPTP, AV is not proportional, but in a different, more complicated way. In 1952, mathematical economist Kenneth Arrow formulated "Arrow's impossibility theorem", which mathematically proves that there is no consistent method of making a fair choice among three or more candidates using a preferential voting method, such as AV.

The AV referendum is a product of the Lib Dem-Conservative coalition deal.

Before the general election, only Labour promised a referendum on AV in its manifesto. In their pre-election manifesto, the Lib Dems promised to introduce a "fair, more proportional voting system". Their preferred system, however, was not AV but Single Transferable Vote (SVT), and Lib Dem leader Nick Clegg described AV as a "miserable compromise" before the general election, although he is now backing the "Yes2AV" campaign. Most Conservative MPs are opposed to AV and Prime Minister David Cameron is urging Conservatives to vote against AV, branding it "unfair" and "unclear". Labour leader Ed Miliband is backing the "Yes2AV" campaign, but the Labour Party is divided over the issue and more than 200 Labour MPs and peers say they will vote against AV.

Ed Miliband said in a speech at the launch of the cross-party "Yes2AV" campaign: "First, AV will make more votes count. (…) AV would let people be honest about their first choice and still have a say in who wins. More people’s votes would help decide the winner, so more votes would count. Second, AV will encourage parties to reach out to a wider electorate so more voices will be heard. Because when more votes count, politicians must count on more voters. Third, AV will help to change the culture of our politics. (…) AV would encourage us to build bridges, not barriers, between parties so that we can persuade more voters of our case.

"I believe today’s political culture, which only encourages division, profoundly damages belief in politics."
In a televised speech on February 18th, 2011, David Cameron said: "There are three big problems with AV. One: it would lead to outcomes that are unfair, two: it is a voting system that is completely unclear, and three: it would mean a political system that is unaccountable."

AV would mean that voters who choose the least popular parties as their first preference could end up having their votes counted several times.

The second and third preferences of those who back the BNP, the SNP, the UKIP, or the Green Party could potentially determine the outcome. The Daily Mail reported that the leader of the Conservative Party William Hague sent an e-mail to party members stating that "a vote for AV will be a vote for the BNP".

The BNP, however, has come out against AV and published a statement on its website saying that "the AV system, as proposed by the Liberal-Democrats, is actually even a greater distortion of the democratic process than the current first-past-the-post (FPTP) system, and the British National Party would much prefer a party list proportional representation (PLPR) system".