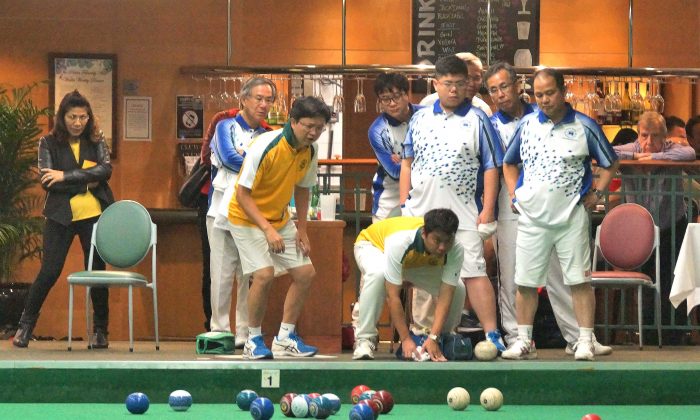 In the last end between Hong Kong Football Club’s Warren Cheung and Craigengower Cricket Club ‘s Kevin Fung (not in photo), Fung used his last shot (red on right) to take out HKFC’s two second shots (the two white bowls on the right) and won four shots in this end. Despite losing the game 20-14, the win in the last end allowed CCC to win the aggregate to take home six points. (Mike Worth)
HK Lawn Bowls

Title Chase Goes Down to the Wire

The match at the HKFC indoor green was widely considered as a title decider as the points difference between the two teams was small.

In the last rink, CCC’s Kevin Fung was down 20-10 into the last end. He was holding a shot with his last bowl in hand. As he needed four shots to win the aggregate, he drove heavily and took out the two closest HKFC shots to win four shots in the end. He lost the game 20-14 but CCC won the aggregate 44-45 and bought home six precious points.

After these two games CCC now lead the table with 42 points, one point more than HKFC-B.

CCC, who will be in action at home against fourth-placed Tuen Mun Sports Association, will guarantee their title if they win 8-0 this weekend. However, Tuen Mun still has an outside chance if they beat CCC 8-0, reverse the shot deficit of 42 shots and both Hong Kong Football Club teams lose 8-0.

HKFC-B will be at home playing Kowloon Cricket Club who still need 3 points to avoid the drop. Third-placed HKFC-A will be away to play mid-tabled Police team.

In the relegation zone, bottom team Club de Recreio will travel to third-from-bottom KBGC-B and they need to win 6-2 to send their opponent down. Second from bottom KBGC-A will play mid-tabled Filipino Club who are guaranteed safety after an 8-0 win against CdeR last week.

In Division 2, the fight for the title was also tight as the Hong Kong Youth Team, CCC-B and Indian Recreation Club all amassed 42 points and are just separated by shot difference.

Elsewhere in other divisions, only CdeR-C in Division 8 are confirmed as a champion, all other divisions will play down to the wire to decide the winner.

All games will start at 3:00 this week, with the women’s fixture suspended for a week to give way for all the men’s matches.