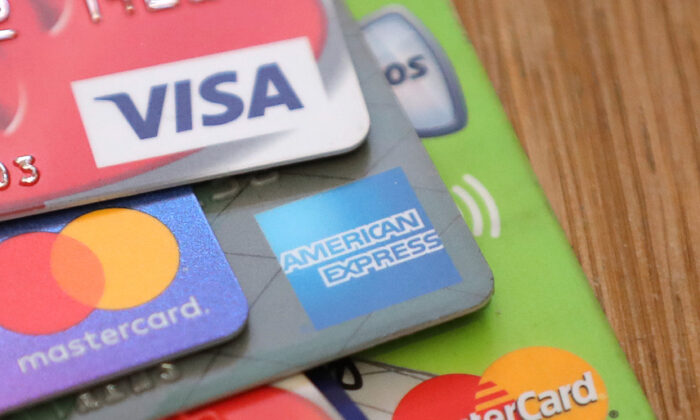 Tis the Season to Go into the Red

But will you still be merry when the bills come due in January?
By Gregory Bresiger

You find yourself unable to pay more than a small percentage of credit card bills each month. You only make the minimum payment. You never seem to pay off any part of the principal.

You don’t expect to ever retire your entire credit card debt in part because the interest amounts are growing. You think you may die owing money to the credit card companies.

You have a problem, card experts say.

“Carrying any balance over to the next payment period costs you a substantial amount of money due to the high APRs charged by the issuers. If this just happens every so often, then you have a slight problem. If it happens often, you have a major problem,” Bill Hardekopf, a senior analyst with CardRates.com, told The Epoch Times.

And this problem advisors say, could hurt you in various ways. It could lower your credit score, limiting your access to credit. And when you get credit, you will be paying a higher rate than the cardholder who pays his or her bills every month. You must take action, advisors say.

“The best strategy to get out of debt is to stop the bleeding. Get a real good understanding of your budget, what’s coming in and what’s being spent,” says Jacqueline Schadeck, an advisor in Atlanta. “Cut down on unnecessary spending and use that money to pay down your debt so you can have a clear mind and a better credit score,”

The problem is card debt is often a lousy deal, Hardekopf notes.

“Credit card debt is some of the most expensive debt you can carry and should be avoided, if at all possible,” he says

The average credit card debt in America is $5,315 and the average card interest rate is 14.65 percent, according to Elite Personal Finance. Its credit card report in September found some 497 million credit card accounts in the nation, an increase of some 12 million over the previous year.

So the average American, who doesn’t retire the balance each month, pays some $800 in interest over the course of a year. They are “revolvers.” They have a revolving credit line. That assumes the cardholder doesn’t add to that $5,315 balance.

Most advisors say consumers should be “transactors.” They are smart cardholders often hated by credit card companies. That’s because they force the card company to provide zero percent short-term loans. They save a bundle in interest charges over decades and qualify for the best deals. But only about 33 percent of cardholders are transactors. Some 41 percent revolve. The rest are “dormant, cardholders with inactive accounts, according to CreditCards.com.

If you’re having a problem with your card, it’s up to you to do something, another advisor says.

“You’ve incurred the debt—once you’ve decided you want to get serious and pay it off, you’ll need to understand your monthly budget, as well as the behaviors that may be compounding your debt, such as impulse spending, or mismanagement of your finances,” Tracy L. Sherwood, an advisor in Clarence, NY, told The Epoch Times.

“I suggest you start by looking at your monthly cash flow to determine how much it costs to maintain your lifestyle, and then determine how much monthly income you may have left over to use toward other discretionary expenses such as eating out, social events, personal items, holiday spending, and yes—paying down debt,” Sherwood said.

“Some people think you can only make one payment each month on your credit card account. That is not true,” he said. “You can make as many payments as you would like. Make small payments throughout the month. For instance, instead of going out to dinner one night, eat at home and take the money you save and make an online payment to your credit card issuer. Do this often and you’ll be paying down the balance at a faster clip.”

Another way of paying down the debt, is to find a zero percent loan or other options that don’t charge almost 15 percent, an advisor says.

“There are many options, a debt consolidation loan, a HELOC (home equity loan) on a home, balance transfers to 0 percent credit cards, a 401K loan, a snowball method debt paydown plan, and maybe even a debt relief company to name a few,” says Michelle Petrowski, an advisor in Anthem, Arizona.

“The one I really like,” she added, “for many reasons that I suggest many clients with credit card debt investigate, is the not-for-profit Debt Management Company that is run by a consumer credit counseling agency rather than a ‘for profit’ debt relief company.”