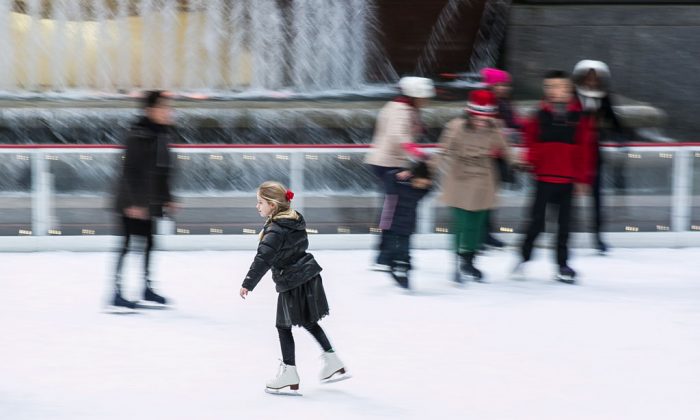 ‘Tis the Season for Ice Skating in New York City

NEW YORK—At Rockefeller Center on Christmas Day, Alain Puyo and his wife were taking photos and video of their two daughters gliding across the ice.

My brother and I, we taught a little girl how to figure skate today.
— Seth Pakman

The Rockefeller Ice Rink is perhaps the most well known seasonal rink in the city. With the Rockefeller Christmas Tree standing above the rink and decorations on all sides, skaters and families said the atmosphere at the rink (which is smaller than many were used to) could not be found anywhere else.

Ice rinks start opening all over the city in late October, signaling the beginning of winter. By December, families from around the world have come to try the outdoor rinks for the first time, and New Yorkers are carrying out annual traditions.

There are fifteen ice rinks open this season. Most are open for at least another month, some to April, and there is usually at least one in every borough.

Some ice rinks are free but charge skate rental fees, and most paid rinks have seasonal passes.

On Staten Island, there is one rink. The WWII Veterans War Memorial Ice Skating Rink is at Clove Lakes Park on Victory Boulevard. It costs $10 to skate in the enclosed rink and $5 for rentals.

Van Cortlandt Park in the Bronx has a seasonal ice rink, but it was closed this year due to lower than expected revenues in previous years, according to a Parks Department spokesperson quoted in the Riverdale Press.

The decorated and iconic spaces have become annual destinations for New York families.

In Queens, there are two rinks, and they are both open year-round. The City Ice Pavilion (47-32 32nd Place) is the only rooftop rink in the city. It costs $7 to skate on weekdays and $10 on weekends, with $5 rental. Sometimes it is closed to the public for hockey classes, so check ahead.

The World Ice Arena at Flushing Meadows Corona Park is at the northeast corner of the park. It is $6 to skate on weekdays, $9 on weekends, and rentals are $5.

There are four rinks in Brooklyn. The rink at McCarren Park in North Brooklyn has the shortest season and will close in January. Adults skate for $8, children for $4, and rentals are $5.

The Lakeside rink at Prospect Park is near the Ocean Avenue and Lincoln Road entrance. It is $6 to skate on weekdays, $8 on weekends, and rentals are $6.

Out on Coney Island, you can skate by the beach. The Abe Stark rink is on the boardwalk at West 19th Street. It is $10 to skate and rentals are $5.

The Aviator Sports and Events Center Rink in Brooklyn is indoors and open year-round. Adults skate for $9, children for $7, and rentals are $5.

In Manhattan, there are eight rinks. Rockefeller Center’s is the most expensive with rates for adults at $27–$30, plus a $12 skate rental fee. Children 10 and under skate for $10.

Bryant Park’s Bank of America Winter Village is just as well known and free, with a $15–$19 skate rental fee. It is the only free rink in the city and incredibly festive with the holiday shops lining the park. The rink is open until early March.

Children under 10 skate for free at the See/Change Ice Rink on Fulton and Front Streets at South Street Seaport. When the Seaport relaunched after Superstorm Sandy, it opened an outdoor ice rink. Adult tickets are $10 and rentals are $6.

Two of the rinks are in Central Park. The Trump Rink is near the center between 62nd and 63rd streets, and its easy to get to from the south side of the park. Adults skate for $11.25 (Monday–Thursday) or $18 on the weekends. Children under 11 skate for $6 and seniors $5, and rentals are $8.

Central Park itself is a must-see on many visitor’s list, and ice skating outdoors in the winter is a must-do activity for many.

Hanna Heomet from Paris arrived with friends last week. While making sure her skates were laced tight, she said she had never been on the ice before.

“I’m actually really scared!” she said with a nervous laugh as the group got ready for the Trump Rink to open. But her friends had suggested it, and she decided she would try.

In Hamilton Heights, the rink has an incredible view over the Hudson River. The Riverbank State Park rink is on the Henry Hudson Parkway between West 138th and 145th streets. Adults skate for $5, children under 11 for $3, and rentals are $6.

At the Standard Hotel, there is a ground-level rink open to the public (848 Washington St.). Adults skate for $12, children for $6, and rentals are $3.

And if you want to skate year-round, the Sky Rink at Chelsea Piers is open for $10, with $5 skate rentals. It is on Pier 61 on West 23rd Street.

While the rinks are a novelty for many visitors, the decorated and iconic spaces have become annual destinations for New York families.

Seth Pakman, her son, said when he and his brother were just a few years old, his dad brought them on the ice, and they haven’t stopped skating since. The rink is smaller than what they’re used to and most people on the ice don’t know how to skate, but it is all about the atmosphere. A few years ago, he added, someone proposed right there on the ice.

“My brother and I, we taught a little girl how to figure skate today,” Seth said. “I want to be a teacher when I’m older, for preschool kids when I’m older, so it’s a chance to hone my skills while doing something I love.”

Coming to the Rockefeller Center rink, you hear accents from all over the world, Rochelle said. There are people who don’t know how to skate who are trying for the first time and learning.