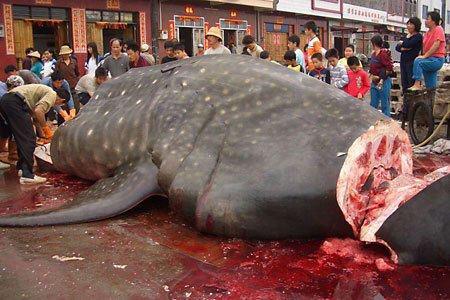 This photo shows the most dangerous species on the planet. The other animal is the harmless whale shark, largest fish in the sea.
Opinion

I’ve spent most of my life working close to sharks. They were always a concern and I certainly have had a few moments when I doubted the sense in what I was doing. But now I’m concerned about what’s happening to sharks on a global scale. I’m concerned about tipping points and the shark fin soup industry.

Why should I care if they are gone?

The research I was doing at that time looked at the make up of the marine fish community as it was exposed to fishing pressure. Specifically, to fishing aimed at top predators on the coral reef. I was trying to find out how much fishermen were reducing the stocks of valuable food fish on the Great Barrier Reef. I found that stocks were devastated by up to 95% in some places. Some reefs had been ‘fished out’.

But I discovered something that wasn’t known before. I came up with a mathematical formula that predicted changes in the entire fish community. I published the work back in 1982.

That’s right! Not just the species the fishermen were catching; it looked like all the species were changing and more importantly, it looked like they might never change back. Sadly, this idea didn’t catch on and was buried in dusty scientific libraries.

Everyone believed that if you left things alone for a while they would repair themselves and go back to the way they were in the “good old days”. This comes from the idea of ‘renewable resources’ and is the way we see the world around us.

The years past and things started to go very wrong in the Caribbean. Reefs there were being over-run by seaweed, fish were gone, and even the corals were dying. A billion dollar tourist industry looked like it might sink into the sunset. By March, 2009 researchers had found that fish abundance that had been stable for decades had given way to massive declines from 1995.

By June, 2012 Dr. Roff, a marine botanist, had completed a study raising concerns about the future of Caribbean coral reefs. Seaweeds were blooming so fast that corals were unlikely to recover in the absence of enough seaweed eating fish; but where had the seaweed eaters gone?

Now in March, 2013; “This is a big concern because the loss of sharks can affect the wider ecosystem,” said Mike Heithaus, executive director of FIU’s School of Environment, Arts and Society. “In working with tiger sharks, we’ve seen that if we don’t have enough of these predators around, it causes cascading changes in the ecosystem, that trickle all the way down to marine plants.” Such changes can harm other species, and may negatively affect commercial fisheries, Dr. Heithaus explains.
The problem has been nailed down to overfishing the apex predators – sharks and some groupers. It was during the last two years that this research caused my early work to be dusted off and looked at again. The concept that overfishing apex predators changes everything is now becoming a cornerstone of contemporary thinking in coral reef management.

Put simply, we must have all the species in reasonable numbers if we want sustainable fisheries. Eliminating an apex predator is like pulling a couple of ‘chips’ out of your computer. It still runs but it doesn’t run the way you want it to.
The problem is that we have discovered this relationship very late in the day. Huge commercial fisheries for apex predators are well established and backed by governments, large industries, thousands of employees, and ultimately millions of consumers. Look at the shark industry that takes between 7,200 and 31,000 sharks per hour, every hour of the day mostly just for shark fin soup.

We all know it can’t go on but people and governments ‘turn a blind eye’ as long as money is being made.The shark fin soup industry is worth about US$630 million annually according to a study published May 30, 2013 in Oryx – The International Journal of Conservation. After all, we still believe fish stocks will go back to the way they were in the “good old days” once we’ve taken what we want. The next generation can fix it!

Where nature is concerned we just have to understand — we don’t understand. We are fools to think we can exploit nature however we wish and that it will simply cope. It just doesn’t work that way.

If we can learn anything from natural history it is that when systems begin to collapse there is a point from which there will be no turning back. This comes from that tired old mathematical formula that sprang into existence back in 1982. Scientists with fewer years call it a “tipping point”; a point where everything changes forever.

If you doubt this then ask the dinosaurs for their opinion.