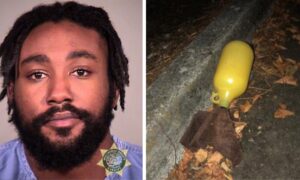 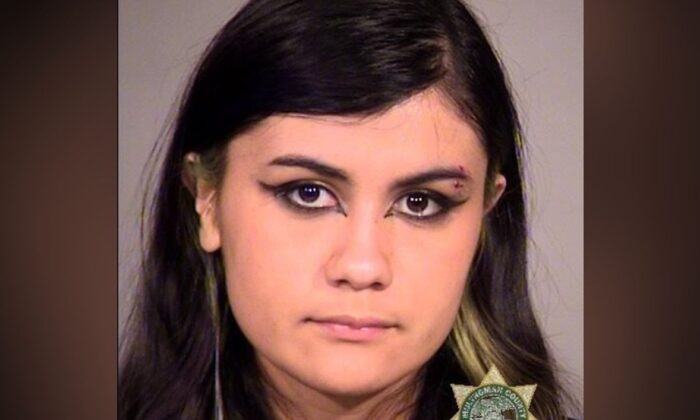 A tip from a Portland Police Bureau informant led to arson charges against a woman for allegedly setting fire to a police union building on April 13, according to court papers.

Alma Raven-Guido was observed pouring an accelerant on a fire in Oregon’s largest city during a riot, a police affidavit obtained by The Epoch Times says.

The informant allegedly saw Raven-Guido place three bottles of the “flammable liquid” into her backpack.

Portland Fire & Rescue Lt. Jason Anderson was also present during an interview with the police information, according to the affidavit.

Raven-Guido was identified as a University of Oregon student and told officials that she was a journalism student. Raven-Guido was arrested last August on several misdemeanor charges including disorderly conduct in riots and protests before she was released.

The affidavit said that Raven-Guido and other rioters were dressed in “black bloc”-style clothing similar to what Antifa uses.

Antifa is a far-left, anarcho-communist network that regularly engages in violence.

A court-appointed attorney for the defendant did not respond to a request for comment.

The fire was allegedly started by rioters on Tuesday night, leading officials to declare a riot, authorities said.

A member of the crowd was spotted spraying “unknown accelerant on the wooden framing around a door of the building, then lit it on fire,” Portland Police said.

“I don’t consider these protests. We’re talking about direct action events that are being billed as such and these are criminal events,” Portland Police Bureau Capt. Tina Jones told media outlets, adding that $25,000 in estimated damage was done.

“Burning things, breaking things and attempting to injure police puts lives at risk. I condemn those who were involved in these criminal acts,” Mayor Ted Wheeler also said during a City Council meeting on Wednesday morning. “For those who engage in criminal destruction and violence: Please know that our investigations continue and we’re doing everything we can if you’ve been involved in this kind of criminal destruction to identify you, to find you, to arrest you, and to hold you accountable.”