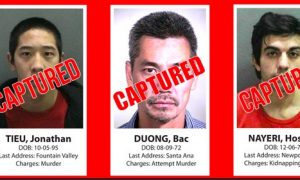 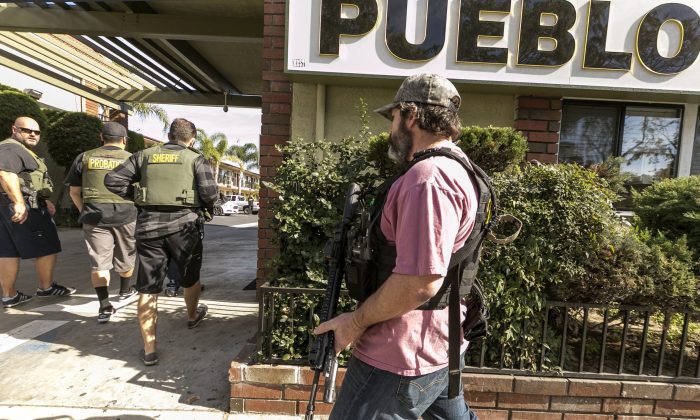 Orange County Sheriff agents search the back of a hotel for escaped inmates in Santa Ana, Calif., on Jan. 29, 2016. (AP Photo/Damian Dovarganes)
Crime and Incidents

Tip About Van Led to Arrest of Escapees in San Francisco

SANTA ANA, Calif.—After a week of SWAT raids and a gang dragnet, it was a simple tip from an observant citizen that led police to the two remaining inmates who broke out of a California jail eight days ago using a Google Earth map and a rope made of bed linens.

A citizen flagged down officers near San Francisco’s Golden Gate Park just before 9 a.m. Saturday and pointed out a parked white van that looked like one believed to be stolen by a trio of inmates during the brazen escape, Orange County Sheriff Sandra Hutchens said at a news conference.

The tipster also said a person who looked like one of the fugitives was in the area.

As police approached the van, Hossein Nayeri—whom officials have called the probable mastermind—was captured after a short foot chase. Police discovered the second fugitive, 20-year-old Jonathan Tieu, hiding in the van with ammunition, but no gun, she said.

“I think I did a big ‘Whoop!’ in the air,” Hutchens said, adding that she was elated. “No sheriff wants to have an escape, especially as dangerous as these individuals were. My fear was that someone in the community was going to get hurt because they really had nothing to lose in my mind.”

No sheriff wants to have an escape, especially as dangerous as these individuals were. My fear was that someone in the community was going to get hurt because they really had nothing to lose in my mind.
— Sandra Hutchens, Orange County sheriff

A third inmate, Bac Duong, 43, surrendered Friday after walking into an auto repair shop in Santa Ana just a few miles from the jail where the trio had been housed.

The three had been awaiting trial on separate violent felony charges, including murder, attempted murder, torture and kidnapping. Duong and Tieu have ties to street gangs that operate in the shadows of Orange County’s thriving Vietnamese community.

Authorities still don’t know the answers to a number of questions about the escape, including how the inmates got their hands on the sharp cutting tools necessary to hack their way through jail walls, where they had been hiding, and how Duong got back to Santa Ana after parting ways with the others.

The three inmates were housed together in a large module that held 65 other men, about half of whom were in custody for violent felonies.

In the early morning hours of Jan. 22, the trio sawed through a metal grate covering a plumbing tunnel, then crawled through piping to reach the jail’s roof. There, they pushed aside barbed wire and used a rope made of bedsheets to rappel four stories to the ground.

Jailers did not realize the men were missing for 16 hours.

On Thursday, authorities arrested a woman who taught English at the jail. Nooshafarin Ravaghi, 44, gave Nayeri a paper copy of a Google Earth map that showed an aerial view of the entire jail compound, sheriff’s spokesman Lt. Jeff Hallock said.

She was booked on suspicion of being an accessory to a felony and was being held pending a court appearance set for Monday.

It wasn’t clear if she had a lawyer.

Ravaghi and Nayeri also exchanged “personal and close” handwritten letters, but Hallock could not say if the two were romantically involved.

The day after the escape, Duong responded to a Craig’s List ad for the white GMC van and stole it during a test drive, authorities said. The trio likely lived in the van during their week on the lam.

Saturday’s arrests happened near Golden Gate park, an area popular with both tourists and the homeless.

Vergel Dalusung said he saw three police cars surrounding a white van that was parked across the street from a McDonald’s, just outside a Whole Foods Market. He only saw police handcuff one man and put him in a patrol car, and it happened very quickly, he said.

“And that’s when I stopped looking because I figured it was all taken care of,” Dalusung said.

‘Mastermind’ of California Jail Escape Has Long Past

Hutchens said the men’s capture now clears the way for an intense probe into how they were able to escape. That will mean examining where systems, policies and procedures may have failed.

No staff members have been disciplined or removed, she said, adding that any investigation would take time.

“We do not want another escape from an Orange County jail, I can tell you that,” the sheriff said. “We’re going to do everything we can in our power—and it’s not enough to say, ‘Gee, we have an old jail, it’s a challenging place.'”

Duong, a native of Vietnam, has been held since last month on charges of attempted murder and assault with a deadly weapon.

Tieu is charged with murder and attempted murder in a 2011 gang shooting. Nayeri had been held without bond since September 2014 on charges of kidnapping, torture, aggravated mayhem and burglary.

The three will soon be transported back to the same jail from which they escaped, Hutchens said.

“I can tell you they won’t be together,” she said.