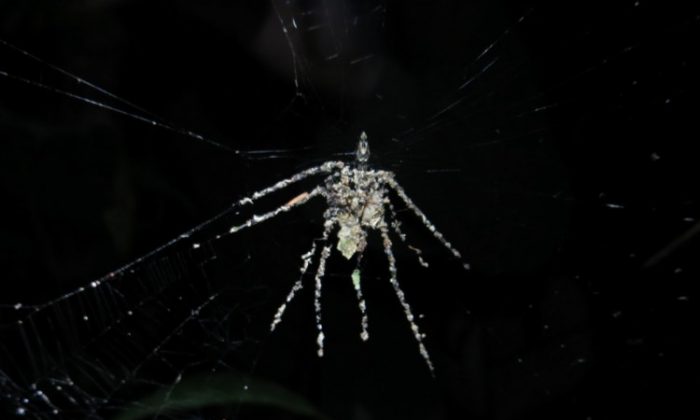 Miniature spiders have been discovered in Peru that create large fake spiders in their webs.

Biologist Phil Torres spotted the spiders while walking in the forest near the Tambopata Research Center. At first glance it looked like there was a dead spider about an inch long sitting in a web.

The web started shaking as he got closer, so the spider seemed to be alive after all. With an even closer look, however, Torres saw that the spider was just a clump of leaf fragments and debris.

“It turns out the master designer behind this somewhat creepy form is in fact a tiny spider, only about 5 millimeters (0.2 inches) in body length, that is hiding behind or above that false, bigger spider made up of debris,” Torres wrote in his Rainforest Expeditions blog.

The small spiders shake the webs to make their leaf creations look more realistic. They probably build the decoys so that predators, such as paper wasps, will attack the fake spiders instead of the real ones.

Other spider species in the genus Cyclosa have been known to build decoys, but theirs are merely clumps of debris the same size as the spider. The decoys Torres found are much bigger than the spider, and they even have legs.

“Considering that spiders can already make really impressive geometric designs with their webs, it’s no surprise that they can take that leap to make an impressive design with debris and other things,” Torres told Wired Science.

It’s possible that this spider is a new species of Cyclosa, although it may take a while to be confirmed.

Torres found 25 more of these spiders within that same square mile, but he hasn’t found any in other areas yet. He plans to go back in January and collect some of them to study.

Phil Torres is a conservation biologist, science educator, and TV host, who works on research and education projects in California and Peru. Phil is on Twitter @phil_torres and you can read his blog here.