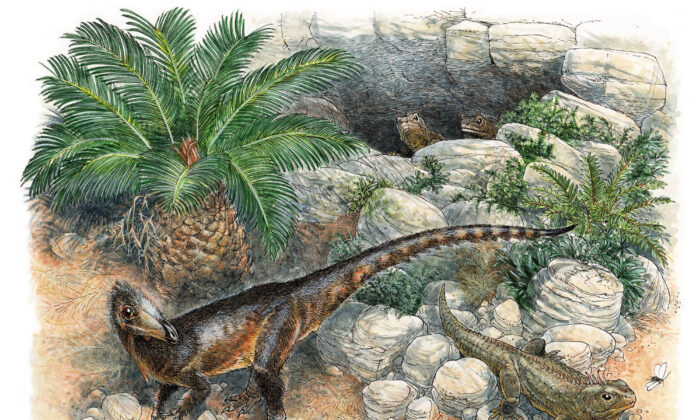 An undated illustration of the oldest known meat-eating dinosaur from the UK—a chicken sized animal that would have been one meter (3 feet) long with its tail. (James Robbins/Natural History Museum via PA)
archaeology

This carnivorous dinosaur fossil, originally discovered at Pant-y-ffynnon in southern Wales, was mistaken for another species for many years.

Finally, after 40 years, during which it has been lost, found, and renamed, paleontologists say it represents an entirely new species which they have named as Pendraig milnerae.

It is the oldest meat-eating dinosaur found in Britain and roamed an area—which is now Wales—200 million years ago.

Dr. Stephan Spiekman is a paleontologist in the department of earth sciences at the Natural History Museum in London and was involved in the research.

Completely dwarfed in size by the T-Rex, the fossil of the Pendraig milnerae was originally discovered in a quarry in the 1950s.

“This animal that we’ve now described, it was actually already found back in the 1950s, so it’s been in the collection of the museum for a while. And actually somebody even studied it for a part of their PhD thesis back in the eighties. But the animal was never formally published and therefore also not never formally named,” says Spiekman.

The new dinosaur fossil was also around a lot longer than the T-Rex.

“Finding dinosaurs is quite common. Finding dinosaurs that are this old is much rare. So when you look at, for instance, something like a T-Rex, which lives around 66 million years ago, this is three times older. So this just gives you a sense of scale of how long the dinosaurs were here for,” he says.

The precious fossil had actually gone missing in the Natural History Museum in London—where they were brought to be studied after they were discovered.

They were eventually found in a drawer with crocodile material, and the fossils have been named in honor of a paleontologist, Angela Milner, who helped track them down.

It is believed that the fossil bones are so small because they came from a young dinosaur, but scientists surmise that the adult may originally have been a lot bigger in size.

While the Pendraig milnerae fossil does not carry quite the same charisma as the T-Rex, the discovery will have no less ability to enthrall scientists and engage younger audiences.