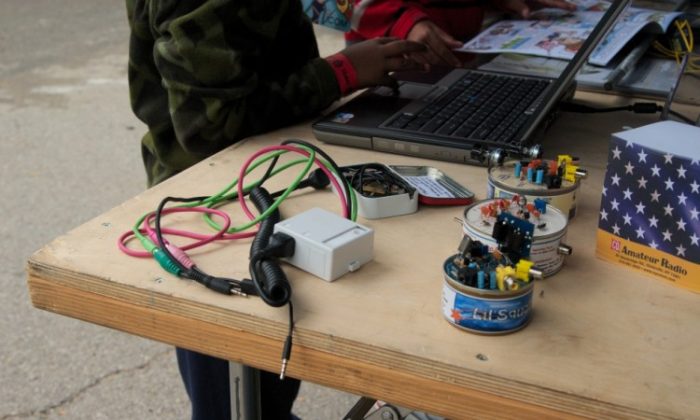 NEW YORK—In a far-off corner of the Maker Faire at the New York Hall of Science in Queens on Sept. 29, between a cheering crowd around a small racetrack and the blaring music of a party booth, Thomas Tumino sits calmly, and to any interested passersby points at a small white box and says, “that’s an iPhone interface.”

For Tumino, vice president of the Hall of Science Amateur Radio Club, whose call sign is N2YTF, it’s all very simple.

“If you can imagine it, it can be done,” Tumino said, noting that he built it himself without plans as reference.

The radio iPhone plug works just like dial-up modems did. “It used to be that if you dialed up onto the Internet, you’d have a modem and you’d connect your computer into the telephone lines,” Tumino said. “The modem took digital information and made it into sound.”

These days, with cable connections now dominating the Internet connections, ham radio users use the sound cards on computers to serve the same function. It lets them access the Internet and send data using radios.

“But we don’t just use the same format you used to talk to the Internet back then,” Tumino said. “We use formats to send images, to send digital information—many different formats.”

“Today there are iPhone apps where you can use the systems in the phone—and its sound card, which is being used as a modem,” he laughs momentarily as he says this, as if amazed that nobody else thought of it. “And then you connect that into your radio with an interface like this,” he points to the small white box, “that just isolates the telephone from the radio, and then you can do all sorts of things.”

Wires from a ham radio are strung over the fence and into a nearby tree. An antique telegraph key sits on a table next to hand-made telegraph keys built into tin cans.

Nearby, Ken Bailey, call sign WA9KNZ, paces around with a large antenna. Patrick McEavor, whose call sign is KC2RBE, stands by attentively with a pad and pencil.

“What he’s trying to do is… he’s got the signal,” says McEavor. He stops talking and readies his pencil. The once quiet handset erupts with static.

“He picked up satellite number AO27,” McEavor says. “It’s a satellite that’s rotating the earth, and he’s hitting it using a little hand transmitter. It runs on only five watts, and you can get over the horizon coverage by bouncing the signal using this…” A voice emerges from the static. He quickly readies his pencil.

Baily, still holding the antenna, starts speaking out numbers and letters, which McEvor quickly jots down.

“It can be challenging,” McEvor says, glancing away from his notepad. He says the numbers and letters are the other guy’s call sign. “So far all we’ve got it ‘CO.’”

McEvor says “So five watts on a hand transmitter hitting Cuba. That’s not bad.” His face lights up in a sudden realization. “That’s that guy! He’s got a really good setup. If it’s the same guy, we hit him during the last Maker Faire.”

What McEvor and Baily were doing was the usual routine for ham radio users. “We practice for emergency communications,” McEvor says. “But we also do it as a hobby—one learns to use the equipment better—and also to just talk to guys around the world.”

Although they understand how the technology works, the wonder of it never seems to fade. “It’s really wild,” McEvor says, his pencil and paper still ready.

Tumino, sitting by the booth and his ham radio iPhone interface, says that the hobby is about using technology to explore nature.

“Some people ask me why, when we have computers and telephones, what are you doing here?” Tumino says. “I say it’s kind of like the difference between sail boating and power boating; or fishing and picking up a fish in the supermarket.”

“This is interacting with nature and seeing what you can do, where you can talk, what are the conditions today and what will that yield,” he says.