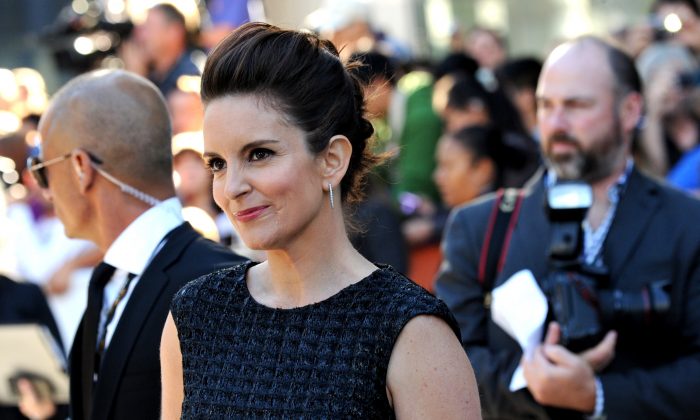 Tina Fey arrives at the premiere of "This is Where I Leave You" on day 4 of the Toronto International Film Festival at Roy Thomson Hall on Sunday, Sept. 7, 2014, in Toronto. (Photo by Evan Agostini/Invision/AP)
Entertainment

TORONTO—A family drama starring Jason Bateman, Tina Fey, and Jane Fonda already speaks for itself in terms of the tonality of the film. “This is Where I Leave You,” directed by Shawn Levy, was as funny as it was dramatic. And although everyone followed the script closely, which was adapted from a novel, there was room for improv.

Co-star, Dax Shepard said that Fey was like a vending machine of jokes. That she gave him his best improv line, and Fonda also got a line from her.

“Comedy is so much harder than drama,” Fonda said during the press conference for the film at the Toronto International Film Festival (TIFF). “I come from a long line of depressives,” she added.

Although Fonda insists that comedy doesn’t come naturally to her, Jason Bateman strongly disagreed. He even went so far as to say that 24 out of the 25 laughs at the press conference were because of Fonda’s dry humor when answering the reporters’ questions.

Even co-star Corey Stoll said that being in a cast of such heavyweight comedians was like entering the major league, and he knew right away that there was no way he could be as funny as the rest of the crew.

“I just tried to be as honest as possible,” Stoll said.

Director Shawn Levy that when he read the book, he knew he had to do the story.

“I found the book both funny and poignant,” Levy said about the book. But he was surprised to see Fonda show up to an audition.

“I can’t believe Jane wanted to read,” Levy. Fonda, however, said that she was nervous at the audition. “If she was nervous I was twice as nervous… she made me cry like baby,” Bateman said.

To prove that she has no less of dead-pan humor than any other actor Fonda made the audience laugh yet again. When talking about her work with adolescents which spans over 30 years of her life, and her several non-profits for adolescents in Georgia, Fonda said she’s always around young people.

“I have no choice, most of the people my age are dead,” Fonda said.