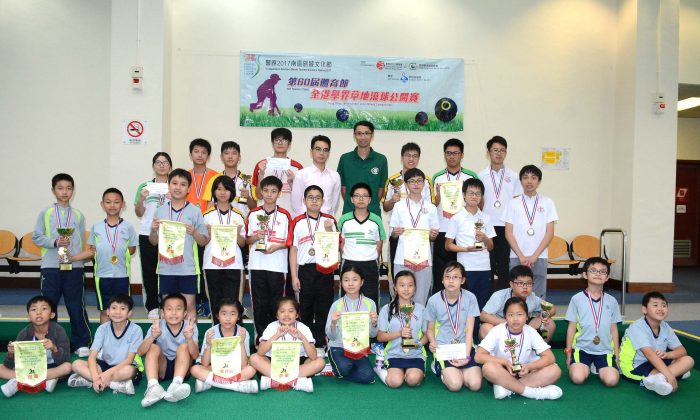 A total of 13 teams from five secondary schools and two primary schools participated in the Hong Kong Inter-schools Lawn Bowls Competition on Monday, May 1, 2017 at the Ap Lei Chau Sports Center. (Stephanie Worth)
HK Lawn Bowls

This year the event registered a record low number of entries when only five secondary schools and two primary schools participated. The seven schools sent a total of 13 teams.

It is quite an alarming sign for the competition because the number has been on a decline since reaching the height of 18 participating schools in 2012. Heron Lau, the vice president in charge of youth development at the Hong Kong Lawn Bowls Association, said that they have recognized this trend and a plan has been implemented to improve the situation.

“Since the beginning of this year we have contacted the schools proactively to arrange demonstrations for them. We will also offer training courses to them if they are interested to build a school team. On the other hand, we are also aligning with clubs that have their own greens to build Bowls Academies in an effort to grow the bowling community within its neighbourhood,” said Lau, “The effectiveness was yet to be seen but we see that this is a long term project. Whatever the initial results , we will continue with it.”

Of the five secondary schools taking part, YOTTKP has shown their determination by sending four teams to participate. The champion team included Lyndon Sham and Tim Sham, two of the members who clinched the title last year. They were joined by skipper Rayson Law who plays in the league with Tuen Mun Sports Association.


The team won all four games to take the trophy. Skipper Law believes their bowling experience won them the competition, “All three members in our team play in the Premier League so our performance is more stable than other teams. This is particularly important in this level of games.”

The runners-up were also from YOTTKP which included Tam Wing Chui and Kwan Tsun Hin, the winner and runners-up of the Youth Novice Lawn Bowls Competition in March this year.

In the primary section, LTSSLS also sent four teams to the competition and collected both the champion and runners-up trophies. The champion team included Lai Chiu Wai, Zeng Ling Chak and Evans Yuen who won all four of their games during the course of the competition.

The Premier League continues this coming weekend starting at 2:30pm on Saturday May 6, at all greens in Hong Kong.