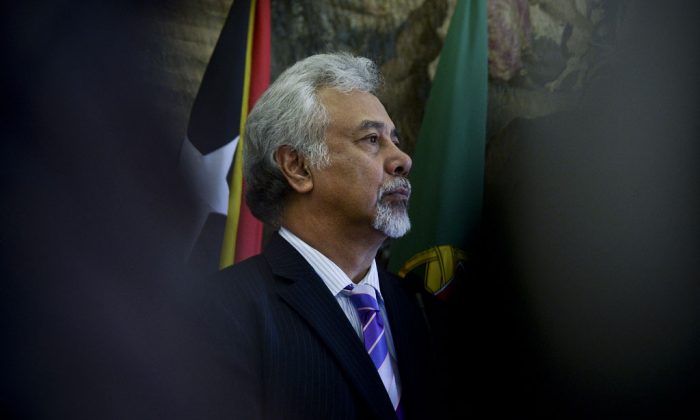 DILI—The leader and founding father of Asia’s youngest nation, Xanana Gusmao, announced in November that he was resigning as prime minister and leaving politics. The announcement comes amidst growing state failure and rampant mismanagement. Since East Timor’s independence from Indonesia in 2002, Gusmao has dominated the small nation’s politics. His intention to resign has led many to accuse him of cowardice – after all, he carries the bulk of the responsibility for the current chaos. His resignation is likely to create a power vacuum and exacerbate the crisis.

State failure in East Timor can have severe consequences for regional security creating a refugee crisis and providing a safe haven for criminal organizations and other illicit activities. Despite massive international support and oil money the country remains fragile.

More than a decade after independence from neighboring Indonesia and two United Nation interventions, the former Portuguese colony remains an impoverished and fragile state. For a decade Timor was the highest recipient of foreign aid in the world, in per capita terms, with Australia, Portugal and Japan footing most of the bill – even as the country, since 2007, has been receiving significant revenues from oil and gas at the tune of $2 billion a year. Very little has reached the common people while the country’s infrastructure remains one of the worse in the region with power cuts frequent even in the capital of Dili.

According to a May 2013 International Crisis Group report, 71 percent of the workforce in East Timor is either unemployed or just informally employed. Nearly two thirds of the country’s population is under 30 years old creating a serious source of tension. One third of the country lives in poverty and 50 percent are illiterate. As of 2010, the country had the highest rate of urbanization in the world at 5 percent a year with thousands of unemployed young men moving into the capital. Slums with deplorable conditions are emerging on the foot of the mountains that encircle Dili, while luxury houses such as the one built by the Minister of Finance Emilia Pires in Farol are being erected by a privileged few.

Timor is no stranger to poverty. However, the appearance of small pockets of affluence next to abject poverty is new. Child prostitution is common, even among school children. In June this year the secretary of state for gender told the media that prostitution was increasing in the country, particularly among high school students.

Corruption is fast becoming endemic with several scandals exposed in the media involving ministers and other senior officials. The most ridiculous case is that of the minister of justice, in contempt of court for refusing to pay child support to his chronically ill child.

Following the July 2012 elections Gusmao created the largest government in the Asia Pacific with a cabinet made up of 55 members – this in country with a population of just over 1 million. Not surprisingly, the state bureaucracy is in total disarray with Gusmao himself admitting that most of his numerous ministries are only able to use about 30 percent of their yearly budgets allocated to the ministries. Public servants go for months without pay, and hundreds of international advisors go for a year without pay. The government is not only ridiculously large, but includes ministers accused of murder to sexual assault.

The country has one of the most generous retirement packages for its politicians. Ministers, deputy ministers, members of parliament, judges and other senior officials are entitled to a life pension that varies from $2500 to $4000 after completing a five-year term – in country where the per capital income is $3335. Neither the government nor the opposition has been keen on changing the law, instead spending millions on luxury cars, houses and trips abroad while unemployment continues to grow. So far Prime Minister Gusmao has kept a fragile peace by spending significant amounts in expanding patronage networks, awarding contracts and other benefits to supporters and buying off critics.

The strategy works – as long as the state continues to have access to generous finances from the country’s oil wealth. The off-shore oil production creates few jobs because of minimal production and refinery capabilities. Another problem, several studies indicate that the country’s oil and gas reserves will last for another 15 years at most. More than a decade of independence, riots, corruption and outright arrogance on the part of the young nation’s leaders have led to an economy completely dependent on oil and gas, one that produces little else. Oil and gas exports account for more than 90 percent of the nation’s GDP, the highest dependence on natural resource extraction in the world. The Asian Development Bank estimates that in 2014 the country’s oil revenues will decline by 41 percent.

There are some signs of hope. Timor remains a democracy, its media among the freest in the region. Figures like President Taur Matan Ruak, a former chief of defense force and guerrilla fighter, and Minister for State Agio Pereira are widely respected for their honesty. The country’s former prosecutor general, the implacable and ill-humored Ana Pessoa jailed several senior officials including former Minister of Justice Lucia Lobato. While Pessoa was eventually replaced after some obscure maneuvers, her successor seems determined to carry on her legacy. When Pessoa was forced out of office in March 2012, the local media run headlines proclaiming, “She is still our prosecutor general” and the US ambassador held a farewell party. A survey of law students found that over 80 percent wanted to become prosecutors.

Despite many challenges, East Timor remains a democracy and perhaps in the end that may be its salvation.

In January 2014 Gusmao reaffirmed his intention to resign, adding that the state was in complete disarray and something needed to be done soon. He has promised on several occasions a radical reduction in the size of government and a serious crackdown on corruption. His resignation will only accelerate the process of state failure. Ironically, Gusmao oversaw such a state of chaos and only he can fix it. Citizens wait to see if the hero of independence and the father of Asia’s youngest nation has the courage to lead the nation in what maybe is its most difficult hour. Or, will he take the easiest option and leave?

Timor’s case also has profound implications for future international efforts at state building. If a tiny territory rich in resources that received generous support from the world fails, then what are the chances for less prosperous territories? Since the early 1990s international efforts at state building have increased, however there are few success stories. While the international community has hailed Timor a success story this may turn out to be a self-deceiving exercise.

East Timor due to its heroic struggle for independence that saw a quarter of its population butchered by the Indonesian military has and still elicits great sympathy from the international community. The country and its leaders should not take such generosity for granted as the great hopes that once inspired its many supporters around the world are slowly fading away.

Loro Horta was the United Nations project manager for security sector reform in East Timor and a senior adviser to the country’s foreign ministry. He has written extensively on East Timor for over a decade.

Republished with permission from YaleGlobal Online. Copyright © 2014, Yale Center for the Study of Globalization, Yale University.