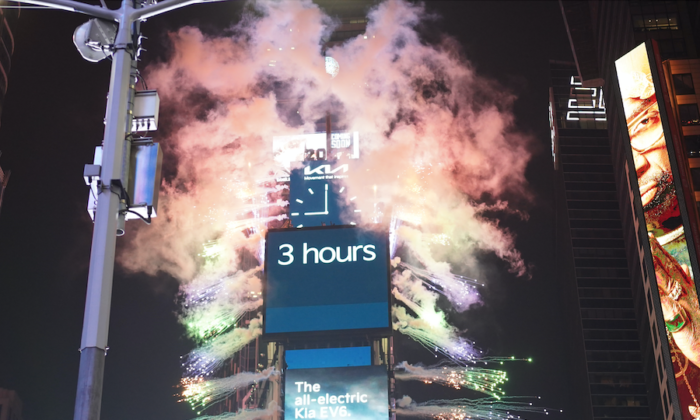 MANHATTAN, New York—The ritual of the world-famous crystal ball drop in Times Square resumed this year after the first cancellation since 1907 of 2020’s New Year’s Eve due to the CCP (Chinese Communist Party) virus.

Attendance was scaled back, and everyone who was older than 5 had to show vaccination proof to be part of the party.

Any unvaccinated child younger than 5 years old had to be accompanied by a vaccinated adult, the mayor’s office stated.

New York Mayor Bill de Blasio said last week that everyone had to wear a mask as well, but that was not the case—many people, including police, were not wearing masks.

Mayor-elect Eric Adams praised de Blasio’s decision last week: “The Mayor has made the right move to take precautionary measures as we learn to live with COVID and fight the Omicron variant—and New Yorkers and visitors alike can now enjoy Times Square and the rest of our city as we ring in 2022.”

Doug Stuart and his wife from Colorado weren’t concerned too much with the new variant, Omicron.

“We’re vaccinated, wearing masks, and there is some distancing,” he said, laughing a little bit.

His wife said that the staff were doing a great job with crowd control, and they would not have come last year because there was “a little too much uncertainty, and we didn’t have vaccination,” she said.

“I hope that people get vaccinated and wear masks if necessary and do what it takes to get our world back going,” she added.

Stuart hopes more people are able to come next year.

“I hope there are more peaceful endeavors throughout our country and negotiation for peace,” he added.

Gwen Delfosse from France says that for her children, who were present, it was a dream to be in Times Square during New Year’s Eve.

Delfosse was very concerned about the CCP virus, “but life is going on, so we have to live and keep going.”

“I hope next year can be much better, because we had catastrophes and it was not so cool.”

First-time ball drop viewer Victoria Christensen was very excited to be part of the event, and is looking forward to finishing school next year.

As for the virus, she was a “little bit concerned,” but “we’ve been taking the precautions that the CDC recommended, we got the vaccine, we’re getting the booster, we’re getting tested, [we] got our masks.”

Morgan Price said, “If I could say one thing about going into 2022, is that everybody should be kinder to each other and have kinder hearts.”

Last year, she thinks “we forgot that we’re all human and that we all have feelings and emotions.”

Price believes that there were too many problems related to race, climate change, and politics.

“We should just be kinder to one another!”

Austin and Christina Tretter were also witnessing the event for the first time. They are health care workers from Minnesota, and their new year wish is “for more staff.”

They said that they’ve had staff shortages during the last two years.

Christina believes the reason for people leaving is that they are “burnt out.”

“Not necessarily because of COVID, but because hospitals are overwhelmed,” she clarified.