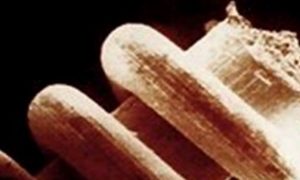 Timeless Mystery: How Could a Swiss Ring-Watch End up in a Sealed Ming Dynasty Tomb?

A mystery surrounds the curious excavation of a strange artifact and those who recovered it from the depths of an ancient tomb in China. When archaeologists reportedly recovered a modern-looking, mud-encrusted artifact from a 400-year-old sealed tomb in 2008, their astonishment was great. For some, this type of discovery could have only meant one thing—it was evidence of time travel. Was the discovery real? Was it a hoax? Could the find have been an intriguing artifact out of place and time?

Reports described the team as composed of archaeologists and journalists filming a documentary at a dig at a sealed tomb dating to the Ming Dynasty in Shangsi, southern China. As one of the coffins was being cleared of soil before being opened, a strange thing happened.

We picked up the object, and found it was a ring. After removing the covering soil and examining it further, we were shocked to see it was a watch.
— Jiang Yanyu, Guangxi Autonomous Region Museum

“When we tried to remove the soil wrapped around the coffin, suddenly a piece of rock dropped off and hit the ground with metallic sound,” said Jiang Yanyu, a former curator of the Guangxi Autonomous Region Museum, according to reports, including a Daily Mail article.  “We picked up the object, and found it was a ring. After removing the covering soil and examining it further, we were shocked to see it was a watch.”

The strange metallic object was said to be a small golden ring, with a watch face on its front, approximately two millimeters thick. Tiny hands on the watch showed time had frozen at 10:06. Most astonishing of all, the back of the diminutive watch was said to have the word “Swiss” or “Switzerland” written in English.

“Swiss Made” is the term used in recent decades to show that a product has originated in Switzerland, especially relating to watches.

How was it possible that a tomb sealed for 400 years had come to hold an artifact that could only have been created after the establishment of the present state of Switzerland in 1848?

How was it possible that a tomb sealed for 400 years and dating to the Ming dynasty (1368–1644) had come to hold an artifact that could only have been created after the establishment of the present state of Switzerland, (in 1848; previous to then it was known as The Old Swiss Confederacy)?

Ring-watches were not popular until after 1780 in Europe. In 1588, Queen Elizabeth I is reputed to have worn a special ring-watch with a protrusion which would scratch her finger as a clever “alarm.” Additionally, in 1755 Caron, a Parisian watchmaker created a ring-watch that was wound with a key. However, this is all academic, as the ring-watches were not known to be in vogue during the Ming Dynasty, and in its reported condition the ring doesn’t seem to have been a protected grave-good. Indeed, it is said the ring was on the outside of the coffin, and seemed to fall away with a light touch.

How could such an artifact have been discovered so out of place and out of time?

Some have said time travelers from the future may have dropped a modern ring in an ancient location. Others say that if the strange piece of jewelry had been dropped in the last century or so, a rodent might have taken it and burrowed into the tomb.

It is also possible that the “sealed” tomb was not as secure as the Chinese officials and archaeologists had presumed. Could early tomb-raiders or explorers have gained access even though there are no reports of any of the ancient Chinese artifacts having suffered damage or theft—something which might be expected if the tomb was entered?

Could it be that this whole incident is a hoax? Whatever the truth, this alleged finding tantalizes the imagination, urging us to consider how this strange artifact could have found it’s way into the tomb.