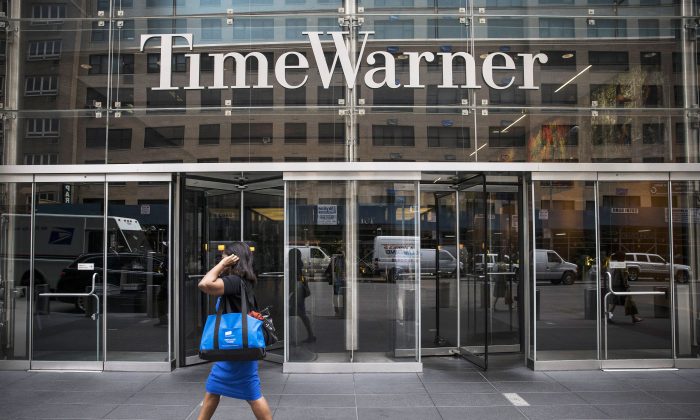 The entrance to the Time Warner center in New York City. The entertainment company was taken to task by the city council for dealings with CBS on Thursday. (Andrew Burton/Getty Images)
New York

NEW YORK—Time Warner Cable subscribers will be waiting a little longer to see CBS programming restored to the cable company’s line-up, after a hearing at city council failed to push negotiations forward.

CBS programming was dropped from Time Warner Cable Aug. 2, as extensions to the company’s previous retransmission contract expired and negotiations for a new contract broke down.

Before she left, Quinn scolded Whelan for his attitude when he testified, telling him that “neither party has behaved well” and both parties seemed “very aggressive.”

She said CBS and Time Warner Cable had been given access to public airwaves, worth millions if not billions of dollars. She said both companies were permitted to utilize the airwaves for free “as long as they serve the public interest.”

“The question remains, are they still serving the public interest?” she asked.

Quinn said she and other council members had prepared a letter to the Federal Communications Commission. If Thursday’s hearing could not provide a resolution for New Yorkers, she would send the letter later.

Time Warner Cable told council members that it had offered to carry CBS’s programming for one year under the same terms of the current contract while the two parties continued discussions.

But CBS said it would only give Time Warner Cable four more weeks to continue negotiations under current terms. The contract extension would have ended right at the start of the football season on Sept. 8.

Time Warner Cable said CBS’s timing would put them at a disadvantage during negotiations.

“Time Warner Cable told us they would have more leverage in the negotiation if they dropped us, which they immediately proceeded to do,” Martin Franks, the executive vice president of planning, policy, and government relations for CBS, told the council members.

Matthew Brill, an attorney at Latham & Watkins who is representing Time Warner in the matter, said when the contract’s extension ended Aug. 2 Time Warner lost the right to broadcast CBS programming.

Franks, from CBS, said aside from economics, it was the terms and conditions that the parties had been stuck on.

He said that Time Warner had called for terms that would affect CBS’s contracts with on-demand Internet TV providers like Amazon, and Netflix.

Franks has been negotiating distribution agreements for CBS for more than a decade and said “only this latest negotiation with Time Warner Cable has gone badly off course.”

Time Warner had offered CBS two options, one where they would keep the existing terms for another year, while negotiations for new terms continued, and another “a la carte” option, where subscribers could choose to pay for different CBS channels.

Time Warner’s Rory Whelan told the council members that the company would only consider reimbursements after they had settled things with CBS.

Both parties declined to tell the council members how much the contracts they had negotiated, past and present, were worth, because they were bound by non-disclosure clauses.

Time Warner Cable has around 12 million residential video subscribers in the United States. The number of subscribers dropped by around 191,000 since March, according to Time Warner’s Second Quarter financial report.

Correction: Matthew Brill was incorrectly identified in an earlier version of this article as a Time Warner executive. Epoch Times regrets the error.