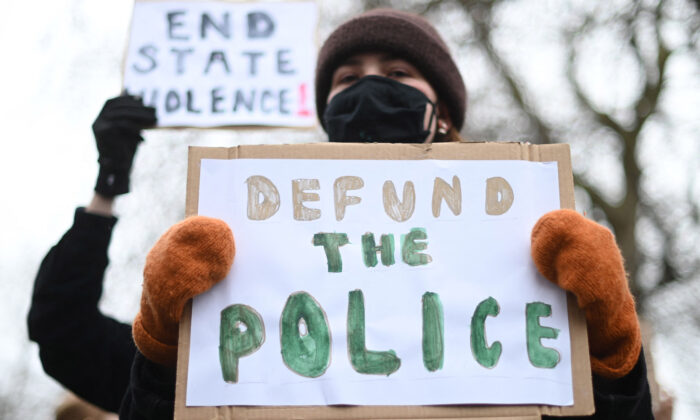 The voters have spoken. So now can we finally bury the insidiously foolish demand to “defund the police?”

And while we’re at it, can we also agree to ignore the Marxist-inspired message that started with the Black Lives Matter movement calling for outright abolishment of not only the police but jails, prisons, parole, and the court system as well?

Stick a fork in these ideas. They are done.

No place was the American public’s disdain for these philosophies more starkly demonstrated than in Minneapolis, ground zero of nationwide anti-police protests following the horrific May 2020 murder of George Floyd. Voters in that city roundly rejected a proposition that would have done away with the police department and replaced it with a nebulous-sounding Department of Public Safety.

It’s worth noting that the defeat of that proposition came at a time when violent crimes have been on the rise in Minneapolis. And, by the way, the pro-police mayor, Jacob Frey, won reelection.

Voters in other parts of the country also expressed disapproval for liberal or overtly progressive candidates who embraced the idea of defunding law enforcement.

In Seattle, the new mayor is Bruce Harrell. As president of the city council, he refused to go along with the panel’s efforts to cut the police budget in half. Harrell, the city’s first Asian American mayor, appealed to citizens disgusted with the city’s rampant homeless problem. Seattle voters also elected a new city attorney, a rare Republican, Ann Davison, who stood in stark contrast to her abolitionist opponent who praised last year’s street protesters as “heroes” after they set fires and detonated an explosive inside a police precinct.

In Virginia, Democratic former Gov. Terry McAuliffe said he was “proud to be endorsed” by a group that supports defunding the police, abolishing prisons, and dismantling ICE: the U.S. Immigrations and Customs Enforcement agency. That likely lost him votes, especially as Virginia’s murder rate now stands at an all-time high. But the fatal blows to McAuliffe’s reelection bid came after he repeatedly tried to tie his opponent to former President Donald Trump and then sided with the teachers union over parents angry about the controversial race-based teaching atmosphere in Virginia’s public schools.

The so-called critical race theory curriculum also dominated the discourse in a school district race in Southlake, Texas. The dispute made national news after parents complained that students were being taught racially divisive lessons. Andrew Yeager, the conservative candidate, won that race. Also in Texas, Republican John Lujan beat out his Democratic opponent for a U.S. House seat and credited the current political environment.

“There’s a big movement, I think, for conservatism,” he said, “because people are seeing what’s going on from a national level all the way down to our borders and to the jobs and the hardships, gas prices—all these things are big in our community.”

It’s no surprise that New York City voters elected a Democratic mayor, Eric Adams. In that liberal stronghold, Adams often spoke of police misconduct but didn’t surrender to the defund the police movement. Adams is a retired NYPD captain and a passionate supporter of law enforcement who vows to rein in gang violence.

New Jersey’s proudly progressive Democratic governor, Phil Murphy, survived reelection in a surprisingly close nail-biter. During the campaign, he was called out for breaking his own COVID-19 isolation order, which limited the size of public gatherings, to march in Black Lives Matter protests. But Murphy never took a definitive stance on defunding police. Perhaps that accounted for his razor-thin win.

These results shouldn’t be seen as the death of police and justice system reforms. Those will certainly go forward. But the election does underscore that most voters don’t support ill-conceived, knee-jerk solutions to public safety problems, and they don’t vote for politicians that embrace them. Many are minority voters who live in crime-infested areas and realize their neighborhoods would become even more dangerous without the presence of police.

Nationwide voting trends indicate that after our long and often crushing COVID-19 isolation period, Americans are now more focused on family issues such as education and race relations. They are, in large measure, in a decidedly law-and-order mood and they care more about the future than the political past. Future candidates take note.