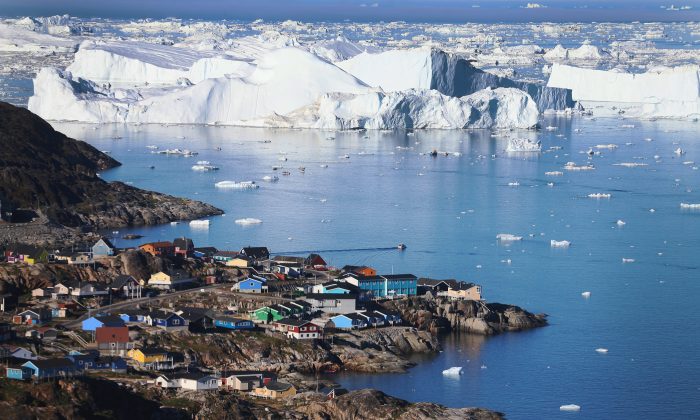 The village of Ilulissat is seen near the icebergs that broke off from the Jakobshavn Glacier in Ilulissat, Greenland, on July 24, 2013. (Joe Raedle/Getty Images)
Environment

2015 was the year the United Nations and governments around the world abandoned rational thought about climate change. Rather than focus on preparing for the very real problems of a continually changing climate, they concentrated instead on the politically correct, but scientifically impossible goal of “stopping climate change.” The whole lot of them seem to have been transported to Neverland.

“Peter Pan” author J.M. Barrie tells us that Neverlands are found in the minds of children. There, with the assistance of fairy dust, Peter Pan can fly and teaches children to ignore their common sense and soar as well. Peter claims greatness, is able to feel danger when it is near, and can even imagine things into existence. There is almost nothing the hero of Neverland cannot do, provided he stays childlike and forgets everything he learns about the real world.

Reality for the U.N. and most politicians is now more determined by what Al Gore and other equally imaginative climate activists say than what real world science and observational evidence actually shows. December’s United Nations climate conference in Paris is a case in point.

Sounding more like an episode out of Barrie’s fairy tale than a serious meeting of world leaders, politicians pledged to prevent “global temperature” from rising more than 2 degrees Celsius (35.6 degrees Fahrenheit). That we are as yet unable to meaningfully forecast climate decades in advance, let alone control it, didn’t matter. They simply ignored the fact that every climate prediction the U.N. has ever made has turned out to be wrong. Humankind has a global thermostat, they imagine.

The naive crusade to stop the world’s climate from changing would be laughable were it not for the cost.

To back up their extraordinary claims, we are told that there is an “overwhelming consensus” of scientists who agree with the U.N.’s position. Thousands of well-qualified skeptics are simply imagined out of existence.

On Dec. 7, the Nongovernmental International Panel on Climate Change (NIPCC) released the report “Why Scientists Disagree About Global Warming.” Authored by climatologist Dr. Craig Idso of the Center for the Study of Carbon Dioxide and Global Change (CO2Science.com) in Arizona, geologist Dr. Robert Carter, former head of the department of earth sciences at James Cook University in Australia, and physicist Dr. S. Fred Singer, emeritus professor of environmental sciences at the University of Virginia and NIPCC founder, the new report totally refutes the claims of climate alarmists. For example, the NIPCC report states:

The naive crusade to stop the world’s climate from changing would be laughable were it not for the cost. The November 2015 report of the San Francisco-based Climate Policy Initiative shows that $395 billion was spent in 2014 on climate finance. Of this, only 6 percent went to adaptation, helping vulnerable people adapt to real climate change today. The rest of the over $1 billion a day was spent on mitigation, trying to affect events that may, or may not, someday happen. Opinion leaders from across the political spectrum are beginning to regard letting people suffer today so as to possibly help those yet to be born as immoral.

After drinking the poison Captain Hook had intended for Peter Pan, Tinker Bell survived only because children across the world clapped loudly to show their belief in fairies. Activists clearly believe that the climate scare will also survive as long as politicians keep clapping. Its time they stopped and let this, the most expensive hoax in the history of science, die.