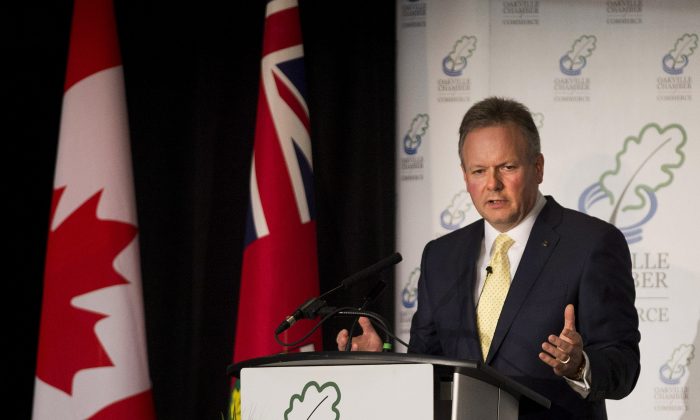 BURLINGTON, Ont.—Bank of Canada Governor Stephen Poloz says Canadian consumers did their part for the economy by borrowing the country through the worst recession since the Great Depression, and now it is the turn of businesses to start spending.

In his first major speech since taking over from former governor Mark Carney earlier this month, Poloz preached the virtues of “stability and patience,” noting that the central bank’s long-standing target of low, stable inflation remains “sacrosanct.”

In the meantime, he said, Canada’s relative good economic fortune through the downturn rests largely with households that took on personal debt.

“Given the circumstances, it was a good thing that households had the capacity to expand their spending—this provided the necessary cushion from the worst effects of the global contraction,” Poloz said in a speech to the Oakville Chamber of Commerce.

Rather than the sometimes hectoring tone of previous warnings about unsustainable debt levels, Poloz says the bank has “urged homeowners and other borrowers to do the arithmetic” on managing their debts when interest rates return to “more normal” levels at some unspecified future date.

“I am confident that this is exactly what people are doing,” Poloz said.

‘The capacity to invest exists’

But the former head of the Export Development Corp. said it is time for businesses to get on board and start to invest.

This spring, Canada’s central bank lowered its 2013 growth forecast by half a point to 1.5 percent and announced in May that its key lending rate would remain unchanged at one percent. The bank’s next scheduled rate announcement is July 17.

Poloz noted that “since the onset of the recession, there has been limited net creation of businesses” and exporters have been particularly hard hit, with exports more than $100 billion lower than should be expected at this point in the economic recovery.

“The group most profoundly affected has been manufacturing exporters, whose ranks have continued to shrink,” said Poloz.

The sustained recession knocked many exporting businesses out of operation, but other areas of the economy are rebuilding.

“The good news is that the balance sheets of corporate Canada are healthy and the capacity to invest exists,” he said.

It’s not a new refrain. Prime Minister Stephen Harper groused last fall about money sitting “on the sidelines” during a G20 economic summit in France, former bank governor Carney spoke of all the “dead” money that remains uninvested, and Finance Minister Jim Flaherty has also weighed in on fat corporate balance sheets.

Poloz sees rising demand in the United States as the trigger for increased exports and a rise in business confidence, a process he suggests may already be underway.

The Bank of Canada governor did his speech shortly before the U.S. Federal Reserve and his counterpart, Fed chairman Ben Bernanke, released their long-awaited policy statement.

As expected, the Fed kept a key lending rate unchanged but offered a slightly more optimistic outlook for the U.S. economy and job market—both good news for Canada, particularly exporters who sell to the United States.

In a statement following a two-day meeting of its top policymakers, the Fed said the U.S. economy is growing moderately. And, for the first time, the Fed said the “downside risks to the outlook” had diminished since fall.

Poloz assured corporate Canada that the central bank under his watch remains committed to low, predictable inflation—calling the inflation target “sacrosanct”—and said it is time for longer-term business planning.

“By explaining the cross-currents at work in our economy, our projections for what’s ahead, and our monetary policy response, we can help to heal business confidence,” Poloz concluded.

Royal Bank of Canada raised its estimate for 2013 economic growth to 1.9 percent Wednesday morning, and said growth for 2014 will be about 2.9 percent.