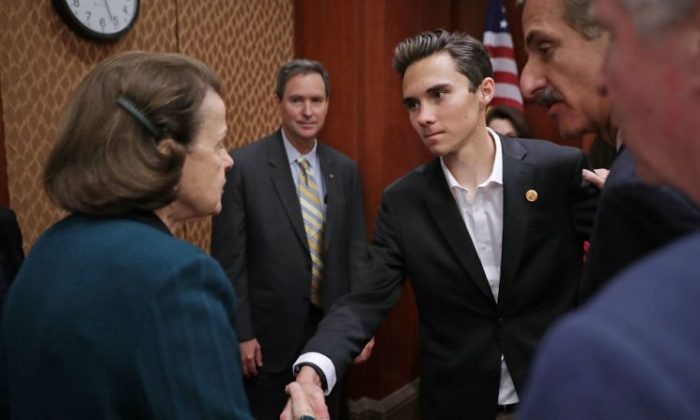 Time Magazine’s latest cover features five survivors of the February school shooting, but all five support gun control, leading to criticism that the magazine is supporting only one viewpoint.

As a group of students from Marjory Stoneman Douglas High School in Florida advocate for laws further restricting citizens’ ownership of guns, including banning AR-15s, other students have expressed that other aspects of the national conversation should be focused on, such as mental health care and holes in law enforcement investigations.

Nikolas Cruz entered the school on Feb. 14 and opened fire, killing 17 people and wounding 16 others, he allegedly admitted to authorities.

Multiple people recommended that Cruz be committed to a mental health institution, including the school resource officer at Marjory Stoneman. Documents obtained by CNN indicated that Scot Peterson, the school’s resource officer, wanted to use the Baker Act on Sept. 28, 2016, after Cruz allegedly made threats against other students.

However, mental health professionals ultimately decided that there wasn’t enough evidence for Cruz to be committed.

NBC reported that Peterson’s recommendation came after Cruz published a Snapchat video in which he cut his arms and said he wanted to buy a gun. He also made a racist comment in the video.

Another potential gap highlighted was FBI agents failing to act on tips after Cruz published threats on YouTube under his own name.

Dozens of calls to the Broward County Sheriff’s Department resulted in responses to the Cruz home, and none of those resulted in Cruz’s arrest. The department was criticized further for their response to the shooting, which included Peterson waiting outside instead of entering the building to try to confront the gunman, as a school resource officer did in Maryland this week.

Among the Parkland students, Kyle Kashuv has emerged as a staunch defender of the Second Amendment, and he has also noted the failures by law enforcement and health officials in stopping Cruz before the mass shooting.

Kashuv was credited by multiple officials in helping craft and include the Stop School Violence Act in the omnibus that is currently being considered by President Donald Trump.

I spent a week with the #NeverAgain kids. Here’s an inside look at how they’re reframing the gun debate as a generational divide— and why they’re not going anywhere
https://t.co/syBO4hGNhY pic.twitter.com/haEyvNGSul

But Kashuv was not featured in the Time magazine cover story, nor were any other students who have similar views.

All five students featured on the cover have aligned with the Women’s March and Evertown for Gun Safety groups and have been advocating for stricter gun control laws, including the outright banning of certain guns. They include David Hogg, whose father is a retired FBI agent, and who infamously hung up on the president when he called and tried to talk with him.

After the magazine cover was published online, critics accused the magazine of outright bias, noting the fact that Kashuv was not even quoted in the article, which features no information about other students or viewpoints.

“Where’s @KyleKashuv?! He’s the one who’s actually been getting something DONE in Washington!” wondered one user.

Once upon a @TIME they did real journalism in this country. pic.twitter.com/ZhECVpOHvM

“Funny, I grew up in the same city these kids did and they DO NOT reflect the views of all the students and adults. In fact, Emma is trying to protect Sheriff Israel and BSO, who’s terrible response caused MORE PEOPLE TO DIE! This is just sick, your bias is showing,” said another.

Criticism included designers making alternative covers that sought to highlight Kashuv and Patrick Petty, whose sister died in the attack and who has been working on legislation in Washington.

Time has not responded to the criticism.