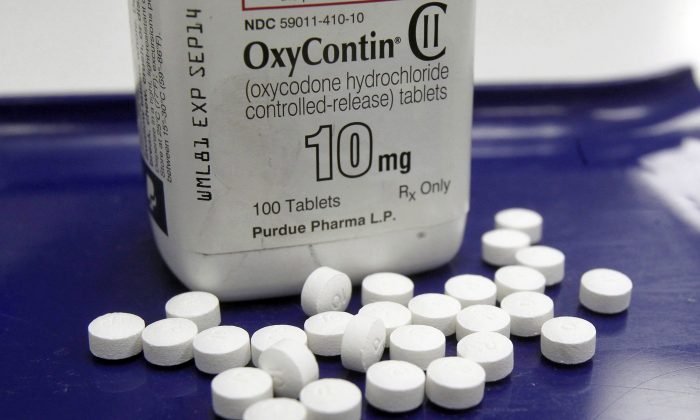 Some Canadian physicians say the federal government should follow the example of the United States and prosecute Purdue Pharma for its aggressive marketing of the opioid OxyContin, which fuelled the current opioid crisis across the country. (AP Photo/Toby Talbot, File)
Canada

Time for Ottawa to Stand up to Purdue Pharma, Say Physicians

An Ontario physician says the federal government is showing zero leadership in prosecuting the pharmaceutical giant that produced and heavily promoted the addictive painkiller OxyContin, fuelling the opioid crisis that is now claiming more lives than motor vehicle accidents in Canada.

Last month, Purdue Pharma announced it would no longer be marketing opioids to doctors in the United States. Purdue pleaded guilty in 2007 for misleading U.S. physicians about the addictive qualities of its top-selling drug and has paid $634 million in criminal and civil charges.

But no such policy changes have been made in Canada by the Connecticut-based company, and some physicians and lawyers say it’s business as usual here, with Purdue facing only one $20 million class-action lawsuit that is currently being held up in a Saskatchewan court.

Approximately 4,000 Canadians died from overdoses in 2017, according to new data from the Public Health Agency of Canada.

Dr. Kieran Moore, a professor of emergency medicine at Queen’s University in Kingston, said the federal government needs to do more to protect Canadians and hold Purdue accountable for its aggressive marketing of opioids.

“You have to say enough is enough and try to prevent history from repeating itself,” Moore said in an interview.

“It’s important to show that in the future, if pharmaceutical corporations show a disregard for informing the population and physicians for the risks of their drugs, there will be punishments, there will be penalties to be paid, and potentially holding people criminally responsible if they blatantly disrespect the laws in Canada.”

Moore said the sole lawsuit against Purdue won’t “even scratch the surface” when it comes to covering the social and financial costs of the company’s role in escalating the opioid epidemic in Canada, which is second only to the United States in worldwide opioid prescription rates.

A former emergency room physician, Moore said he’s seen the devastation from opioid addiction up close, and for every death he estimates there are 130 primary-care visits, 32 emergency room visits, and 10 addiction treatment admissions.

“It absolutely calls for leadership at the federal level but I just don’t know if this is clearly on the radar of the Liberal government,” he said.

“For the most part, pharmaceutical corporations will be regulated through federal laws, and really it’s going to take our provincial legislators lobbying the federal government to take action on this—strong, bold action on changing the regulations.”

Moore said there was some hope with former Ontario Health Minister Eric Hoskins, who pushed the federal government to prosecute Purdue Pharma, but last month Hoskins, a medical doctor, stepped down as minister, leaving a hole in political leadership.

Hoskins urged Ottawa to pursue legal action under the federal Food and Drugs Act (FDA), as the law prohibits the selling or advertising of a drug “in a manner that is false, misleading or deceptive.”

“Although the hundreds of millions of dollars in penalties paid in the United States aren’t trivial, they’re still a small fraction of Purdue Pharma’s profits from the opioid crisis,” the doctors wrote in a recent op-ed. Purdue has generated $31 billion from OxyContin sales worldwide.

“As Canadian communities continue to feel the brunt of the opioid crisis, it’s well past time that Canadian governments finally stand up to Purdue Pharma.”

Health Canada told The Epoch Times in an email it adheres to the law and would take any legal steps necessary to protect communities across the country from false advertising of drugs.

“[Health Canada] is committed to ensuring that information in a health product advertisement is not false, misleading, or deceptive. Accordingly, should Health Canada determine that an advertisement poses a significant safety concern or is in contravention of the Food and Drugs Act … the department would take prompt and appropriate actions,” wrote senior media adviser Maryse Durette.

Durette noted, however, that had charges been pursued under the FDA at the time of the alleged inappropriate marketing practices, which started in 2000, the maximum penalty that the courts could have imposed was a fine of $5,000 per offence. But since then, the FDA has been amended so that maximum fines of $5 million can be imposed.

But according to Amir Attaran, a professor of medicine and law at the University of Ottawa, Health Canada has more effective measures it can resort to besides the FDA.

“[Health Canada] stops at the Food and Drug Act dimwittedly as if it is the only law Parliament ever passed, but of course that is false and there are other laws. For example, the Competition Act contains very substantial penalties for false representations. So too does the Consumer Packaging and Labelling Act,” the lawyer wrote in an email.

Attaran pointed out that even if the penalty under the FDA was only $5,000, Health Canada should still have pursued legal action to show it stands up for Canadians’ safety.

“What Health Canada is really saying—and it’s disgusting—is that they concluded the appropriate punishment was zero, so they did not go after Purdue at all and gave them a mulligan rather than prosecute them criminally the way the Americans did,” he wrote.

For Canada to turn the tide on the opioid crisis, Moore said the relationship between medicine and the pharmaceutical industry must be seriously questioned. For example, he noted that in 2016 Purdue paid $3 million to physicians and medical professionals to buy influence and push more of its opioid products, long after it had pleaded guilty in 2007 for illegal marketing practices in the United States.

“We have to stop those relationships,” he said. “We have to be much more evidence-based and thoughtful with how we prescribe and get [pharmaceutical companies] out of our medical schools, our residency programs, our hospitals, and have a more thoughtful relationship with evidence as the main driver with how we change our prescribing habits.”