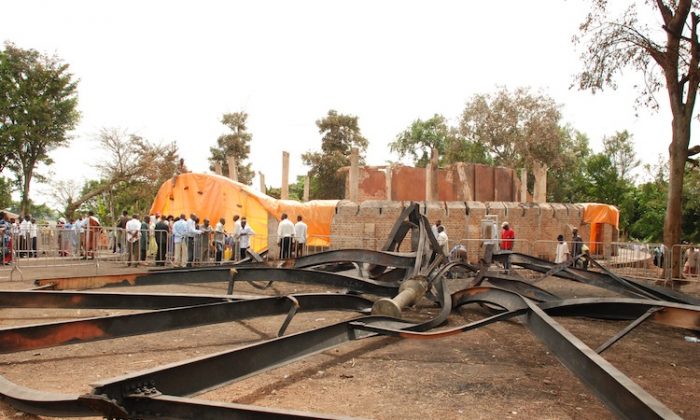 A growing number of world heritage sites have come under attack in the last few years, with the most recent being militant Islamists’ destruction of cultural treasures in Timbuktu, Mali.

The city, once a thriving commercial center and important locale for Islam and science, was in a sense the center of the African-Islamic world.

Here is a list of UNESCO World Heritage Sites that have recently come under threat.

UGANDA: Tombs of Buganda Kings at Kasubi (see above)

The main structure of the Tombs of Buganda Kings was almost destroyed by fire in March 2010. Subsequently, this major spiritual center originaly built in the 13th century, was to be reconstructed.

Due to the city not only serving as a commercial center but also as an important location for Islam and science, it was in a sense the center of the African-Islamic world. Timbuktu has been put on the radar after being partially destroyed by the local branch of Al Qaeda.

PALESTINE: Bethlehem – Birthplace of Jesus: Church of the Nativity

This center of Christmas celebration and major Christian pilgrimage destination was only included as a world heritage site this June, and is already starting under threat. The Palestinians, who submitted the application, cited its lack of regular restoration of the church due to political complications since the 1960s after Israel occupied the region as well as lack of freedom to move equipment due to obstruction by Israeli forces.

The castles, forts, barracks, and batteries of Portobelo together formed a defensive line to protect the harbor back in the 17th and 18th centuries. The fortifications were listed on the endangered list because the rate of deterioration “could undermine the outstanding universal value for which it was inscribed.”

A mountainous range of breathtaking beauty and home to numerous endangered species including the Sumatran orang-utan, the Tropical Rainforest Heritage of Sumatra is now endangered by the proposed construction of four roads, poaching, illegal logging, and “ongoing encroachment.”

This mountainous and lowland tropical rainforest was the very first of more than 900 World Heritage Sites identified by UNESCO. This largest surviving area of what became known as Honduras’s “undisturbed tropical rainforest” became the site of an ongoing inflow of refugees, development within and around the reserve, and logging.

The U.S. government requested this vast subtropical wetland in Florida be added to the danger list following “serious and continuing” degradation of its aquatic ecosystem. The park, centered in a fresh water river, is the home of about 14 threatened species, including the alligator, crocodile, and Florida panther.

MADAGASCAR: Rainforests of the Atsinanana

Known for its many rare and endangered animal species, the Rainforest of the Atsinanana has been a site of exploitation and export of rosewood and ebony, which is slowly destroying the habitat. The World Heritage Committee has issued a decree outlawing such exports, but Madagascar continues to issue export permits for illegally logged timber.

A representation of the blossoming of medieval architecture in Georgia, the Bagrati Cathedral and Gelati Monastery were founded in the 11th and 12th centuries respectively. The cathedral and the monastery made it on the endangered list after the launch of a major reconstruction project that the World Heritage Committee believes will “undermine the integrity and authenticity” of the site.