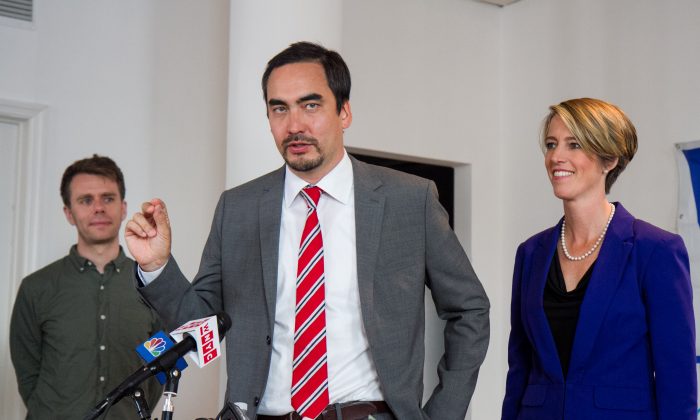 Tim Wu Against the Political Establishment

NEW YORK—Outside the political establishment, Tim Wu’s run for lieutenant governor seems to have the support of just about everybody. The Columbia law professor has received endorsements from major news outlets, celebrities like Mark Ruffalo, and on Monday Reddit’s co-founder Alexis Ohanian.

“Wu is the OG (original gangster) of the open Internet,” Ohanian said.

The problem for Wu is that his opponent Kathy Hochul has the support of elected New York Democrats, who have shunned Wu as they reaffirm their ties to incumbent governor Andrew Cuomo, Hochul’s running mate.

Unlike the gubernatorial matchup, where Cuomo enjoys a lopsided lead, Wu and Hochul are both political unknowns in New York state politics, making the Democratic primary on Tuesday a test of the powers of the media supporting the newcomers, versus the influence of the political establishment.

When Wu tried to endorse former NYC Comptroller John Liu in the latter’s bid for state senator, he was rebuffed. Liu said he didn’t know Wu, and was “not interested in accepting endorsements from people I have never heard of before.”

Liu’s not the only one who has expressed ignorance of Wu, ostensibly to signal loyalty to Cuomo. When Mayor Bill de Blasio was asked last week why he endorsed Hochul—who has a noted conservative voting record in Congress—over Wu, the progressive mayor said he didn’t know who Wu was.

All have based their support for Hochul on her progressive values, which have been difficult to justify in light of her voting record in Congress, where she represented one of the most Republican districts in the state.

When state Sen. Adriano Espaillat spoke at a Go Out To Vote event on Monday where Cuomo and Hochul were also present, he made little effort to conceal that his support for Hochul was due to Cuomo’s status as Albany’s power broker.

“We must show up tomorrow in big numbers and give [Cuomo] a resounding victory, make sure that the rest of the nation knows we have a leader in New York state and a national leader,” Espaillat said, concluding five minutes of praise for Cuomo’s achievements as governor before the crowd at the Hotel Trades Council, a hotel workers union based in Midtown Manhattan.

“Don’t forget to pull the lever for Kathy Hochul,” he added as an afterthought, before immediately segueing into a speech in Spanish.

Hochul has received extensive negative press coverage for having, among other things, opposed licenses for immigrants who are in the United States without legal permission, once receiving an A rating from the National Rifle Association, and having bragged about opposing “Obamacare.”

Hochul has defended her record, citing national security as the motive for her stance on licenses. She also defended her rating from the NRA and her vote to repeal parts of “Obamacare.”

“In upstate New York, many Democrats and Working Families Party members are members of the NRA,” Hochul told Brian Lehrer on WNYC radio. She also explained that she only voted to repeal the parts of ‘Obamacare’ that might have triggered the offshoring of manufacturing jobs in her district.

“I never ever voted to repeal [‘Obamacare’] in its entirety, I misspoke in one debate,” she said. “It’s frustrating to see my record mischaracterized.”

In New York state, the governor and lieutenant governor are on separate ballots in the primary, which means that Wu could become Cuomo’s running-mate in the general election.

Such a scenario would hurt Cuomo’s chances for a possible presidency, as Wu has promised to be a vocal critic of the governor when they disagree, where Hochul said she would never disagree with the governor in public.

“Should I become lieutenant governor with Cuomo, I see the relationship as creative tension,” Wu said on WNYC radio Monday morning. “I will not take orders, I will not do his bidding, but I’m not there to annoy him. I’m there to represent the public.”

The Cuomo–Hochul campaign has studiously avoided contact with the Zephyr Teachout–Wu campaign, as confrontations tend to produce favorable coverage for the latter.

Cuomo and Hochul have refused to debate Teachout and Wu, and Cuomo provoked a minor scandal after refusing to acknowledge Teachout when they met on the Labor Day Parade on Sept. 6.

A video posted on NYTrue.com (see below) shows Teachout navigating through the crowd to get closer to Cuomo. After getting past Cuomo’s aide, Joe Percoco, who was shown repeatedly blocking her path, Teachout, inches in front of Cuomo, repeatedly tries to say hi to Cuomo and waves to him but fails to get any response.

After the parade, Cuomo was asked about Teachout and said, “I didn’t get a chance to talk to her.”

“Cuomo has been trying to deny the existence of a Democratic primary,” Teachout said. “He tried to see through me, but the cameras caught what happened.”

The primary is on Tuesday, Sept. 9.