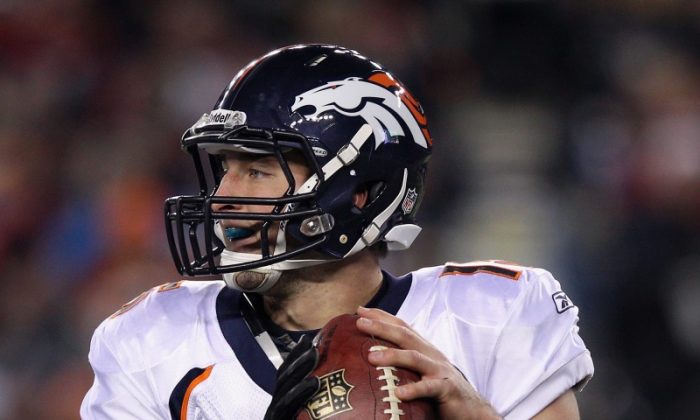 After a back-and-forth day, Tim Tebow is coming to the Jets. (Elsa/Getty Images)
NFL

NEW YORK–The Jets announced on their website Wednesday evening they have agreed in principle to a trade for Denver Broncos quarterback Tim Tebow, ending hours of speculation on where or if Tebow would be traded.

Ultimately, the Broncos offered Tebow a choice between going to the New York Jets or the Jacksonville Jaguars, who were also in the bidding. Tebow chose to go to New York.

The Jets will trade a fourth- and a sixth-round pick in exchange for Tebow and a seventh-round pick from the Broncos.

Earlier Wednesday, the NFL’s website reported the deal had hit a snag due to an issue in Tebow’s contract. At issue was the $6.277 million advance Denver paid Tebow in August 2011, as part of the five-year $11.25 million contract he signed as a rookie in 2010. The Jets reportedly balked at repaying the Broncos the $5 million of that advance, pro-rated for the 2012–2014 seasons.

Finally, Wednesday evening an updated report on the NFL’s website said the trade was back on, sending the former Heisman Trophy winner to New York.

“Our goal was to do the best thing for Tim and the Broncos, and I believe the opportunity that presented itself with the New York Jets accomplishes that objective,” Executive Vice President of Football Operations John Elway said in a statement, on the Broncos website.

Last season Tebow took over as starting quarterback of a 1-4 Broncos team and led them to the playoffs where they upset the Steelers. Tebow was credited with five fourth-quarter comebacks during the run, making him arguably the league’s most popular player.

What role Tebow, who completed just 47.3 percent of his passes, plays for the Jets isn’t quite known. The team signed current quarterback Mark Sanchez to a three-year extension earlier in the month.