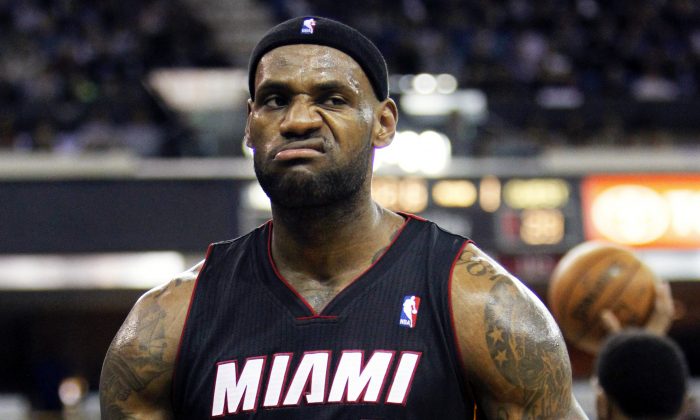 Miami Heat forward LeBron James reacts after scoring and drawing a foul against the Sacramento Kings during the first half of an NBA basketball game on Friday, Dec. 27, 2013, in Sacramento, Calif. (AP Photo/Steve Yeater)
Social Media

The videos are designed to poke fun at James’ well-known practice of falling on the ground during even the slightest amount of contact in order to draw a foul.

The videos–uploaded to Vine and Instagram–show people falling and flailing wildly when walking near another person.

According to Sports Illustrated, “LeBroning” is defined as “the action of throwing yourself to the floor after a light brush by another player, person or animal. Followed by an angry facial expression claiming it is not in any way your fault that you are on the ground.”

“Some of the LeBroners are so committed to their craft that you start to worry about their safety, particularly when they perform their stunts outdoors. After watching the whole video, which includes stops at schools, shopping malls and electronics stores, some childless adults might find themselves seriously considering the possibility of sterilization,” writes Sports Illustrated’s Ben Golliver.

BuzzFeed writer Rachel Zarell pointed out that “LeBroning” started several months ago with a Vine user named Ronnie, and it spread from there.