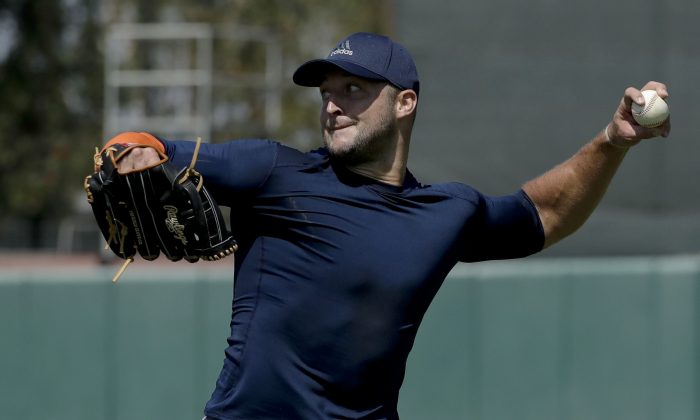 After announcing his desire to pursue a career in professional baseball in early August, Tebow held a workout at Dedeaux Field on the University of South Carolina’s campus on Aug. 30 in front of 28 Major League Baseball teams.

The only teams that didn’t attend were the Chicago Cubs and the Oakland Athletics.

The session was said to have generated mixed reviews, but five teams reportedly spoke with Tebow one-on-one following the workout, with the Atlanta Braves named as the front-runners in signing the former Heisman Trophy winner.

The Braves have serious interest in signing Tebow to a minor-league deal, presuming that the contract is a “low-risk commitment”, reports the Atlanta Journal-Constitution.

“I had fun. I think it went pretty well. Obviously this form of workout is a little different than what I’m used to, but being out there and running the 60 and then throwing it around, and then catching fly balls and hitting some BP, but the most fun for me is trying to hit live pitching,” Tebow told reporters after the workout.

When asked why he was doing this, Tebow said, “Because I love it. Since I was four or five years old there’s been two things that I loved the most in sports. One was playing quarterback, having 10 other guys look at you and depend on you to win a game, and then hit a baseball.”

Tebow has not played baseball since he was a high school junior in 2005, where he was an all-state player.