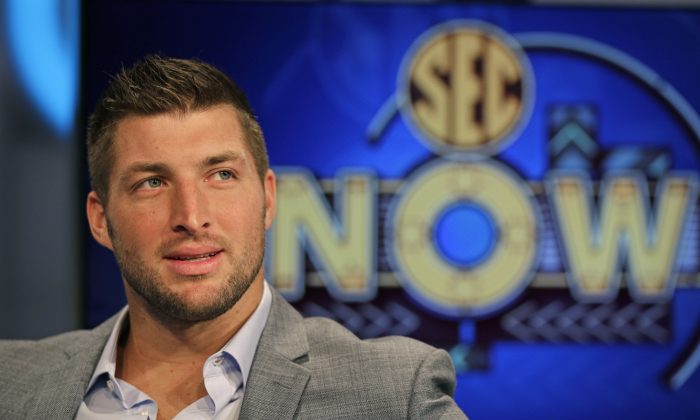 Tim Tebow ponders a question during an interview on the set of ESPN's new SEC Network in Charlotte, N.C., Wednesday, Aug. 6, 2014. Tebow has a new job as a commentator for the SEC Network, but is still looking for work in the NFL as a quarterback. (AP Photo/Chuck Burton)
Life & Tradition

A report saying Tim Tebow was arrested for soliciting a prostitute is fake.

The bogus article was posted on satire and entertainment site DailyLeak.org. “The Sheriff’s Department arrested Tim Tebow, the 27 year old religious icon and former Florida Gators star quarterback, on Friday at a Super 8 on the outskirts of Jacksonville,” it says.

“The former Heisman winner could face jail time, probation, and possibly a fine after being detained. ESPN has consequently put Tebow on indefinite probation from his job as an SEC Network analyst,” it also reads.

The report has no shred of truth to it but it was shared numerous times on Facebook and Twitter.

According to the site’s FAQ, it’s a fake news website.

“The Daily Leak is a satirical website. The contents of the DailyLeak.org may not be reprinted or re-transmitted in whole or in part without the express written consent of the publisher. The Daily Leak is not intended for readers under 18 years of age,” it reads.

“The Daily Leak uses invented names in all its stories, except in cases where public figures are being satirized. Any other use of real names is accidental and coincidental.”

“As analysts, it’s been really surprising how good they both are and how quickly they got there,” Stephanie Druley, an ESPN senior vice president, told the site. “Tim made his debut at the BCS title game and we were sort of blown away with how prepared he was at the College GameDay meeting and how he held his own with those guys. They both study a lot. And it shows on TV.”

Tebow added that he loves his new job as an analyst.

“I love it,” Tebow told the website. “I would watch all these games and analyze them whether I was getting paid for it or not. And hopefully that comes out, that I’m not doing this because it’s my job. I’m doing this because I really enjoy doing this.”