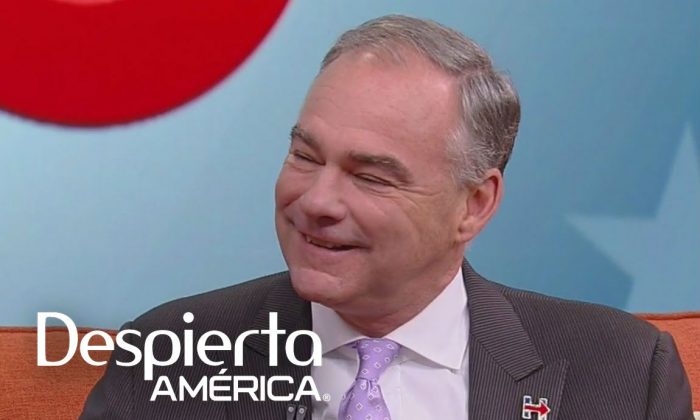 Tim Kaine Shows Off His Spanish, but Do Hispanics Care?

Democratic vice presidential candidate Tim Kaine has made various appearances speaking fluent Spanish, however, Latinos have mixed feelings about his use of the language.

“Bienvenidos a todos (welcome to everyone),” said Kaine in his first speech as Hillary Clinton’s running mate on July 23 in Miami, Florida.

“We’re going to be compañeros del alma (soul mates) in this great lucha (fight) ahead,” said Kaine as the crowd cheered.

Throughout the campaign Kaine has continued to show off his Spanish skills.

On Sept. 26, the day of the first presidential debate, Kaine went on Univision’s morning show “Despierta America” and did an entire interview in fluent Spanish.

“I lived in Honduras 35 years ago,” Kaine told the show’s co-anchor Satcha Pretto, who is from Honduras, in Spanish. Kaine lived in the Central American country in 1980 as a volunteer with Jesuit missionaries.

In the interview, the vice-presidential candidate spoke about the debate—before it took place that night—student debt, gun control, and immigration reform.

“Hillary and I are big supporters of an integral reform of the system,” Kaine said in Spanish. He said that the future Clinton administration will make a strong push for immigration reform in the first 100 days in office.

Kaine also played the harmonica for the Univision anchors and viewers, and spoke about Honduran food.

“I speak Spanish and a little English but I understand,” said Monge, a caretaker for children and the elderly. “Many Hispanics don’t know English, that’s going to help him a lot. Now they understand his projects.”

Monge, who is originally from Peru, won’t be able to vote this year, but will in the future. She is now preparing to become an American citizen by next year, she says.

Monge liked that Kaine didn’t need a translator for the interview, since translations aren’t the same as hearing it in the language she is most comfortable in.

Judging from his interview on “Despierta America,” Monge says she learned more about the Democratic ticket’s agenda on terrorism and immigration, and said Kaine “has good ideas” and “looks prepared” to serve as vice president.

Not everyone is excited

But not all Latinos are thrilled about Kaine’s bilingual skills.

“Latinos need to open their eyes to the facts not to the facade,” added Collado, a speech pathologist from Queens. “We have to look at the person he is running with.”

Collado is undecided on who she will vote for in November, but says she won’t be voting for Clinton.

Elena Vasquez, 34, an American of Mexican descent, says a candidate speaking Spanish is “not surprising.”

Vasquez, a therapist, says the fact that a politician speaks Spanish “doesn’t do anything” for her, but may be a factor for others.

“Despierta America,” a four-hour early morning show that has been on the air for 19 years, ranked as the No. 1 weekday morning show among Hispanics in the United States in the 2015-2016 season, and pulls in more Latino viewers than the combined audience of ABC’s “Good Morning America,” “CBS This Morning,” and NBC’s “Today Show.”

Vasquez says Kaine’s appearance on “Despierta America” is a “good thing” and thinks he’s doing a good job at reaching out to Latinos. Vasquez and her brother will vote in November. She’s still undecided on who will she will cast a ballot for on Election Day, but says she will definitely not vote for Republican nominee Donald Trump.

Jesus Reyes, a 26-year-old student who also works as a waiter, also doesn’t know who he will vote for in November. Reyes, whose parents are from Mexico, saw a clip of Kaine’s appearance on “Despierta America” and said Clinton’s running mate had “very good Spanish.”

“The majority of the politicians have to speak some Spanish,” he said.

A Univision poll released in July found that 68 percent of Latino voters interviewed say that a candidate’s fluency in Spanish does not influence their vote. Nonetheless, a candidate’s use of Spanish can attract Hispanic voters who are more comfortable with Spanish than English. The poll found that 4 out of 10 respondents prefer candidates who are able to speak to them in Spanish.

Other candidates have showed off their Spanish in this election cycle, including former Governor Jeb Bush (R-Fla.) and Senator Marco Rubio(R-Fla.), who speak fluent Spanish, and Senator Ted Cruz (R-Texas) admitted that he speaks “lousy Spanish.” Trump and Clinton both do not speak Spanish.

During the primaries in 2015, Trump criticized Bush for speaking Spanish to a reporter on the campaign trail. Bush had previously said that he speaks Spanish at home with his wife, who is Mexican.

“This is a country where we speak English not Spanish,” said Trump.