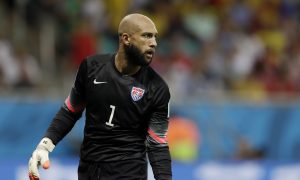 CORRECTION: Tim Howard and Laura Howard are no longer together. This article relied on an article from 2010. The couple divorced after the World Cup that year.

Tim Howard’s wife, Laura Howard, has been supported her husband–the goalkeeper for the ousted US soccer team–from a distance.

She likely watched Howard, whom she married a decade ago, make the most recorded saves in a World Cup match against Belgium on Tuesday.

The US lost 2-1 but Howard’s stock likely rose after his performance. He currently plays for Everton in the EPL.

Laura lives and Tennessee and said she’s been watching the games from a distance.

“I stayed because of the children,” said Laura of living in Memphis. “We had our tickets booked, we were all set to go, then we decided they were just too young to go that far,” she told the Commercial Appeal. Jacob is 4. Alivia is 3. “We didn’t want him to have to worry about his family,” Laura said.

Tim Howard, after his team lost, told ESPN: “I will never forget this night.”

According to Major League Soccer, he made 16 saves.

“That’s my job,” Howard said. “That’s what I signed up to do. It’s part of it. In these big games against top quality competition the levee is going to break at some point if we continue that. Hats off to Belgium they were fantastic. Oddly enough when you’re in the game you really don’t think about that. You kind of fix the problem and you think you can do it.”

“Belgium are a good team with a lot of good players but so are we,” Howard added. “Games like this are never easy to digest after. Everybody put so much into it. It’s disappointing to go out this way. But we need to be honest with ourselves and know that there’s still work ahead of us and we have to keep getting better and keep working. And if we do that then we’re just going to keep moving ourselves along.”