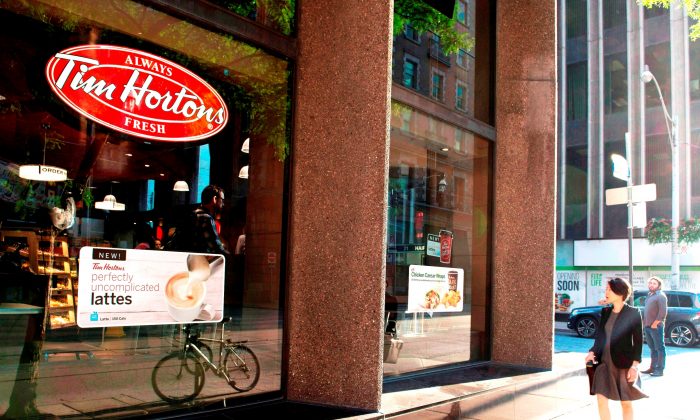 A woman walks past a Tim Hortons coffee shop in Toronto. (The Canadian Press/Doug Ives)
Viewpoints

Tim Hortons: The Killing of Another Canadian Icon

Destroying Canadian business icons seems to be a trend.

In 2017, it was Sears. While employees were losing their pensions because of poor management, lawyers and consultants were receiving millions as the business was shutting down.

Several Canadian retail icons have crumbled due to weak managerial strategies, from Eaton’s to Sears. Most closures, though, have been self-inflicted.

With Tim Hortons and RBI, the act seems almost deliberate, even calculated and tactical. Most executives and members of the RBI board have unquestionable business and financial acumen. RBI’s shares have almost doubled in value since its inception in 2014, when Burger King merged with Tim Hortons and landed its head office in Oakville, where Tim Hortons was based.

But RBI’s share price is starting to weaken. After hitting a record-high price of about $84 in October 2017, it’s now down to approximately $77. Markets may be starting to connect franchise-based challenges with the parent company.

RBI is all about cost management, which has served several food outlets beyond reproach—to this point. But Burger King and Tim Hortons are two very different franchising worlds.

A typical Tim Hortons franchise owner has about three stores. Most are regional family-owned operations looking to support communities and create jobs for the next generation.

In the Burger King division, on the other hand, RBI deals with franchise owners who typically own about 150 restaurants, sometimes even more. Burger King franchise owners are massive companies and, dealing with an outer-agent in RBI, act more like an association of buyers. In addition, Burger King is not an iconic brand—it’s more of a me-too project that followed McDonald’s Restaurant’s expansion years ago. Similar observations can be made about Popeyes Louisiana Kitchen, another fast-food chain recently purchased by RBI.

RBI leaders know a thing or two about operating food-industry franchises. But its style, fuelled by the ever-increasing number-focused obsession of majority owner 3G Capital of Brazil, doesn’t offer the stewardship that the iconic Canadian brand needs.

On the other hand, RBI’s moves may be deliberate. RBI intends to expand beyond Canada and make Tim Hortons a global brand, something Tim Hortons has failed to do over the last few decades. So far, results in the U.K. are promising, but more investments will be required.

RBI is essentially using its established status in Canada to support its international ambitions. In the process, though, there will be several victims, including franchise owners and, most important, low-wage employees. When numbers matter too much, as is the case for RBI, human capital is treated as unimportant. In this case, they’re being asked to pay for uniforms and to limit paid breaks.

An increasing number of Canadians are noticing.

But there’s more to this. Relocating RBI’s head office is a strong possibility. The company has never shied away from the idea, giving itself five years after its expansion in 2014. New U.S. tax reform could create a fiscal climate that makes a move south of the border attractive.

Burger King’s move north in 2014 was considered a corporate tax inversion ploy. So we shouldn’t be shocked if U.S. tax changes turn Tim Hortons into a true American-owned brand. Canada will matter less and less as the company expands internationally.

Nonetheless, the brand is suffering and will continue to suffer, to the dismay of many Canadians. Many of us gather at Tim’s for regular chats or to celebrate birthdays—there have even been weddings at Tim Hortons.

None of this seems to matter to RBI.

Regrettably, Tim Hortons could end up mirroring the life of the legendary hockey player and chain co-founder, Tim Horton. He flourished as a player in Canada but finished his career in Buffalo, where he ultimately met a melancholy end.

Sylvain Charlebois is dean of the Faculty of Management and a professor in the Faculty of Agriculture at Dalhousie University, Senior Fellow with the Atlantic Institute for Market Studies, and author of Food Safety, Risk Intelligence and Benchmarking, published by Wiley-Blackwell (2017).