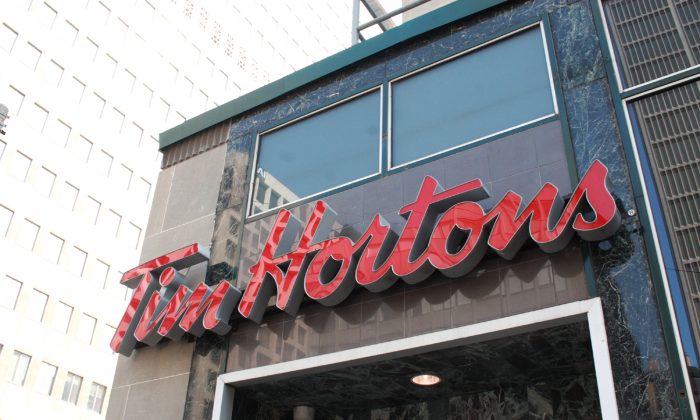 TORONTO—Tim Hortons says its new breakfast and lunch menu items were such a hit with customers that they helped drive up sales momentum at both its Canadian and U.S. stores in the most recent quarter.

The country’s largest coffee and doughnut chain said sales rose 2.6 percent at its Canadian locations opened for 13 months or more, a bump it now expects to push its outlook for the rest of the year higher than previously anticipated.

The sales were driven by customers spending more money during each visit, purchasing higher-priced food items like the crispy chicken sandwich, turkey sausage breakfast sandwich, and a new version of its hash brown.

“Guests have been responding favorably to our menu and technology innovation, resulting in good momentum in our business,” Marc Caira, president and CEO of Tim Hortons, said in a statement.

Despite the sales boost, earnings were partially offset by a decline in same-store transactions at its Canadian locations for the ninth consecutive quarter.

On Aug. 6, Tim Hortons reported flat profits of $123.8 million versus $123.7 million a year earlier for the three months ended June 29. On a per-share basis, the results grew to 92 cents from 81 cents in the comparable period, benefiting from a share repurchase program announced last summer.

Analysts on average were expecting earnings of 87 cents per share, according to Thomson Reuters.

The popular coffee chain, which is known for its ubiquitous “Double Double” coffee, launched a new strategic plan in February as it introduced a number of new hot menu items like paninis and specialty drinks like cappuccinos, lattes, and fruit smoothies, in hopes of getting more people into their locations during the breakfast and lunchtime rush.

Last month, it also teamed up with CIBC to create the “Double Double Visa Card,” which acts as both a Tim Hortons loyalty card and a traditional Visa card.

Its shares hit an all-time record high of $64.21 on Aug. 6, following the release of its latest earnings report.