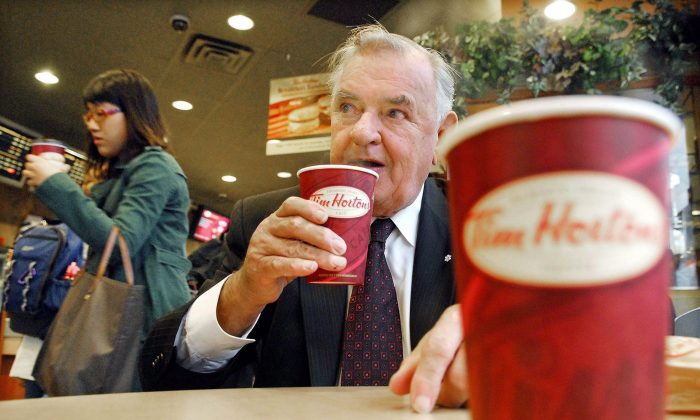 File photo of Ron Joyce, co-founder of Tim Hortons, in 2006. This February, the company set out a plan for expansion not just in Canada and the U.S., but also in the Persian Gulf region. (The Canadian Press/Aaron Harris)
Canada

OAKVILLE—Tim Hortons Inc. reported a 5.5 percent bump in net profit in the first quarter to $90.9 million, as it opened more restaurants in Canada and the U.S., but was hurt by costs related to the launch of its new loyalty credit card.

The profit, which fell short of analyst expectations, amounted to 66 cents per diluted share, compared with $86.2 million or 56 cents in the same period last year.

Analysts on average had expected a profit of 68 cents per share, according to estimates compiled by Thomson Reuters.

The national coffee and doughnut chain said Wednesday that revenues were up 4.8 percent to $766.4 million compared with $731.5 million in the same quarter last year.

“We made continued progress in the first quarter as we focused on aspects of our business where we could make an immediate impact, including simplifying our operations, enhancing our restaurants, and introducing menu innovations,” president and chief executive Marc Caira said in a statement.

“Our organization has mobilized quickly to begin executing on the strategic plan we announced in February. We will see further progress this year in key areas of our strategic road map as we seek to drive sustainable long-term growth.”

Tim Hortons said its operating expenses increased by 7.3 percent in the quarter due to such things as increased rent, renovations and new restaurant openings.

It also blamed the higher costs to $3.1 million of expenses related to launching its own co-branded credit and loyalty card, the Double Double Card.

Same-store sales were up 1.6 percent in Canada and 1.9 percent in the United States, despite some challenges including bad weather conditions.

The company opened 23 restaurants in Canada and 11 in the United States in the quarter.

In February, Tim Hortons had set out on a plan to add about 800 additional stores in the next several years in Canada, the U.S., and in the Persian Gulf region.

Shareholders, unhappy about the lacklustre results from Tim Hortons entry into the U.S., had called on the coffee chain to refocus its expansion plans. The pressure led to the company promising to drive more brand awareness and develop more franchises.

In addition, Tim Hortons has also been working on revamping its food menu to offer more healthier choices as it continues to compete with rivals like Starbucks and Second Cup.

It also pulled the Cold Stone Creamery brand from its Canadian restaurants as part of bigger changes that have included removing about two dozen items from the menu since last fall.

As of the end of March, Tim Hortons operated 3,610 locations in Canada, 870 in the United States, and 44 in the Persian Gulf region.

Shares in Tim Hortons were down almost 1 percent, or 49 cents, to $59.19 in early-morning trading on the Toronto Stock Exchange on Wednesday.