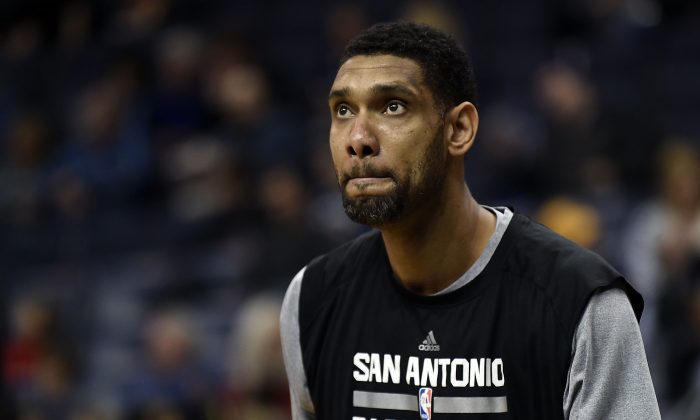 Tim Duncan Returning to Spurs for Another Season: Will LaMarcus Aldridge Join Him?

San Antonio Spurs big man Tim Duncan announced Thursday he’ll be returning for a 19th season. Duncan, who turned 39 in April, was named to the All-NBA third-team this past season—the 15th time he’s been named to one of the three All-NBA teams, tying the records of Kareem Abdul-Jabbar and Kobe Bryant.

The 6-foot-11, 250-pounder from Wake Forest averaged 13.9 points, 9.0 rebounds, and 2.0 blocks per game this past year for San Antonio, which lost in the opening round of the playoffs to the Los Angeles Clippers.

In the bigger picture though, his presence nearly guarantees the old guard in San Antonio—guards Manu Ginóbili and Tony Parker along with coach Gregg Popovich—will return.

It also makes the Spurs an attractive free agency destination, and with coveted power forward LaMarcus Aldridge available, San Antonio would figure to have as good of a chance as anyone.

The Spurs have already dealt center Tiago Splitter and his $8.5 million salary to the Atlanta Hawks, while letting backup center Aron Baynes leave for the Detroit Pistons.

Aldridge would instantly turn the Spurs from contenders to heavy favorites. The 29-year-old four-time All-Star is one of the best post players in the game and is coming off his highest-scoring season ever—23.4 points per game—while bringing down 10.2 rebounds a contest. His presence would not only take pressure—and double-teams—off Duncan, but it would also allow the aging big man to rest more during the season.

But San Antonio will have to fend several other contenders, including the Dallas Mavericks, Miami Heat, or possibly the New York Knicks for Aldridge’s services. The Spurs, although they have the better-looking team for next year compared to either the Knicks, Heat, or Mavericks, are not set up well for beyond 2016 with all of their aging players. But they’re still contenders in ’16 with Duncan’s return.