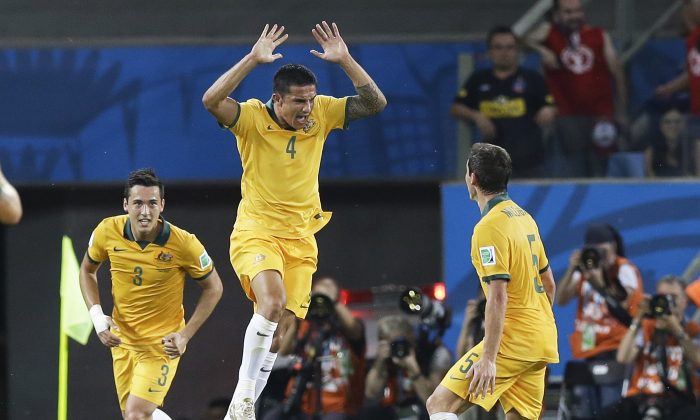 Australia's Tim Cahill (4) celebrates with Mark Milligan (5) and Jason Davidson (3) after Cahill scored his side's first goal during the first half of the group B World Cup soccer match between Chile and Australia in the Arena Pantanal in Cuiaba, Brazil, Friday, June 13, 2014. (AP Photo/Thanassis Stavrakis)
Soccer

Tim Cahill, the Australia striker, scored a goal against the Netherlands.

Cahill answered with the goal about a minute after the Netherlands scored.

The Dutch will start with five defenders, three midfielders and Robin van Persie and Arjen Robben up front.

It worked with great effect last week, suffocating the Spanish attack and then swiftly countering. Van Persie and Robben each scored twice against Spain.

Australia made two changes to the lineup that lost 3-1 to Chile, both forced by injuries.

Ryan McGowan comes in for fullback Ivan Franjic, and Matt McKay moves in to the midfield to replace Mark Milligan, who was ruled out of the match on Tuesday.