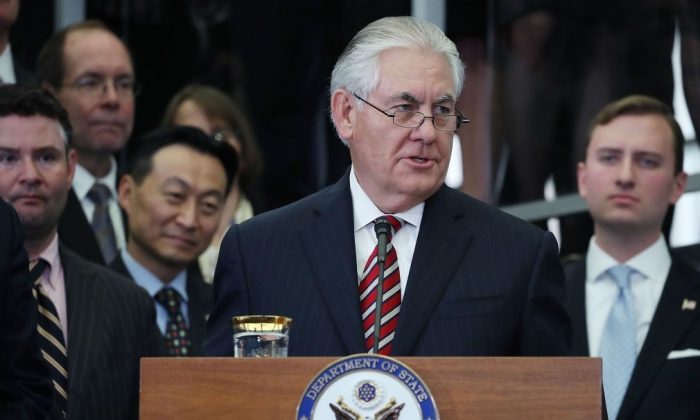 Secretary of State Rex Tillerson speaks to employees upon his arrival at the State Department, in Washington, DC. on Feb. 2, 2017. (Mark Wilson/Getty Images)
Politics

On Feb. 16, “much of seventh-floor staff,” the people who work for the Deputy Secretary of State for Management and Resources and the Counselor offices, were shown the door, according to a CBS News report.

This is a common move under most new administrations, according to James Carden, a contributing writer at The Nation and a former adviser to the U.S.–Russia Presidential Commission at the U.S. State Department.

The seventh floor consists of deputy secretaries and undersecretaries, nearly all of whom are political appointees.

There has been mixed reporting on Tillerson laying off the seventh-floor staff.

“When administrations come in, there’s always a lot of turnaround up there,” Carden said, noting that the only oddity in the move is that the Trump administration took as long as it did to clean out the seventh-floor staff and that it doesn’t have immediate replacements.

“I don’t doubt that purges are really happening at lower levels and such, but I think the seventh-floor story is overblown,” he said.

There has been mixed reporting on Tillerson laying off the seventh-floor staff. On the left, it has mainly been framed as him going after diplomats, with CNN saying it “sent shock waves through the agency and has left career officials on edge, in part because of its abrupt nature.” On the right, many stories focused on the established power structures on the seventh floor, made up of those who may still be loyal to the Obama administration.

The seventh floor of State Department headquarters has a bit of a notorious reputation for its broad influence over U.S. decisions on security, immigration, diplomacy, and legal issues. With its powers, and the fact that many staff are appointees, it also has a reputation of being a pseudo unelected government.

Members of the U.S. intelligence community often refer unfavorably to those in the office as “bow ties,” “Mandarins,” or “Black Dragons.”

Geopolitical intelligence agency Stratfor described the “Black Dragons” in a Feb. 18, 2010, report as “a powerful element within the State Department that is averse to security and does its best to thwart security programs.” They are characterized as considering “security counterproductive for diplomacy.”

Stratfor states that even when Congress gives guidance to the State Department on security issues, such as the Omnibus Diplomatic Security and Antiterrorism Act of 1986, “the Black Dragons do their best to strangle the programs, and this constant struggle produces discernible boom-and-bust cycles, as Congress provides money for new security programs and the Black Dragons … use their bureaucratic power to cut off those programs.”

Also located on the seventh floor is a small circle referred to as “The Shadow Government,” members of which were named in FBI reports on investigations into whether former Secretary of State Hillary Clinton had improperly stored or transmitted classified information on her personal email server.

According to part 4, page 56, of the report, “There was a powerful group of very high-ranking STATE officials that some referred to as ‘The 7th Floor Group’ or ‘The Shadow Government.'” It said that every Wednesday afternoon, the group met to discuss public information requests and “everything CLINTON-related to FOIA/Congressional inquiries.”

Rex Tillerson: Diplomats Must Be a Team Despite Personal Beliefs

The FBI report says “The Shadow Government” was able to change protocol on how documents on Clinton were released, and says they “did have control of the release process for the approximately 30,000 emails, or 52,455 pages related to the CLINTON FOIA request, and it was decided to be a rolling release.”

The timing of the layoffs sparked additional speculation. It came just two days after The New York Times published a front-page report claiming Trump campaign members inappropriately communicated with Russia—though it noted there was no evidence of the campaign colluding with Russia.

The day after the Times report, on Feb. 16, Trump held a press conference, during which he promised to find the source of the leaks.

The most damaging of these leaks, published by The Washington Post on Feb. 9, alleged that now former national security adviser Michael Flynn privately discussed U.S. sanctions with Russia before the inauguration, then lied about it to Vice President Mike Pence. Flynn stepped down soon after.

These incidents have sparked rumors of a “soft coup” against Trump being lodged by insiders in government and in intelligence agencies, who have monitored phone calls of top Trump administration officials and are attacking them by leaking records to the press.