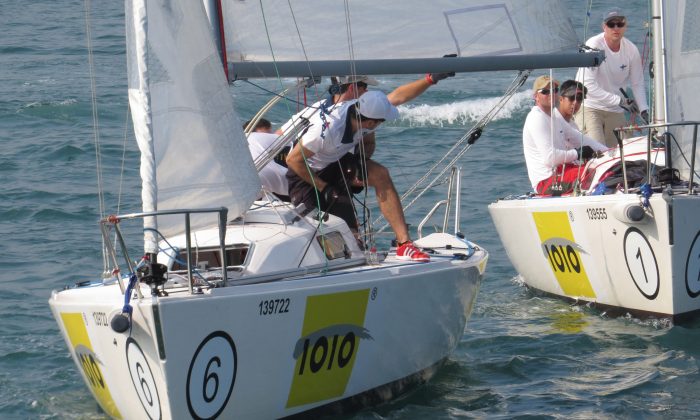 This Grade 2 International Match Racing event organised by the Royal Hong Kong Yacht Club on May 10 to 12, 2013, attracted 3 of the top 10 internationals, Ian Williams of Great Britain (1), Phil Robertson of New Zealand (4) and William Tiller of New Zealand (7). On this occasion Tiller took home the silverware, ahead of Robertson and Williams. (RHKYC/Koko Mueller)
International

William Tiller of New Zealand took first place in the 1010 4G International Match Racing Regatta on the weekend. In an all-Kiwi Final, Tiller out-sailed Phil Robertson to win the title in two-straight races.

In the Petit Final, in the race-off between losing Semi-finalists to decide third and fourth, Ian Williams of Great Britain edged out Maximilian Soh of Singapore, also in two races, for third.

With match racing featuring head-to head course races in a round robin and knock-out finals stages, 12 competitors in 76 races were held in this Royal Hong Kong Yacht Club organised regatta to find the eventual winner.

In the 11-match round robin stage, Tiller (World No. 7) and Robertson (4) had both won 10 matches. Robertson had beaten Tiller in their head-to-head race to finish on top of the rankings, which determined the four competitors in the finals stage.

Williams (1) had only lost to both Tiller and Robertson, winning 9 matches that put him in third spot in the round robin rankings.

Meanwhile, David Gilmour (27) of Australia and Soh (107) both lost 4 matches to finish on seven points. But, although Gilmour beat Soh in their head-to-head race, he was placed fifth because of the 0.5 penalty he had picked up on the first day due to a collision.

In the Semi-finals, although Williams won his first race against Tiller, he lost the next two races, or flights, by inches, allowing Tiller to progress to the Final.

Meanwhile, a similar pattern emerged in the other Semi-final between Robertson and Soh. Soh won the first flight, but Robertson took the next two fairly comfortably and progressed to the Final.

Accordingly, Williams and Soh raced in the Petit Final for third place.

The first sailor to win two flights, in both the Final and Petit Final, would decide the overall placing.

The RHKYC stated in a media release that the breeze was holding well at 4.5 to 6 kts for the first race in the Final and Petit Final. Williams was in control from the start and finished five lengths ahead of Soh. Meanwhile, Tiller edged ahead of Robertson on the first downwind leg and managed to stay in control for the rest of the race.

In their second race, Williams finished a boat length ahead of Soh to finish third overall. Meanwhile, Tiller recorded his second straight win over his former skipper Phil Robertson to win the title.

Fortunately, the third races in both finals were not needed as the wind died to 2 kts soon after the title deciding races.

In the World Rankings table released on April 17, Williams had 12,152 points, Robertson 10,702 and Tiller 10,190. The ISAF ranking system’s calculations for Match Racing is quite complex and the affect of this, and other events in the past month, will be seen in the new rankings issued on May 15 on www.sailing.org/mrorankings.