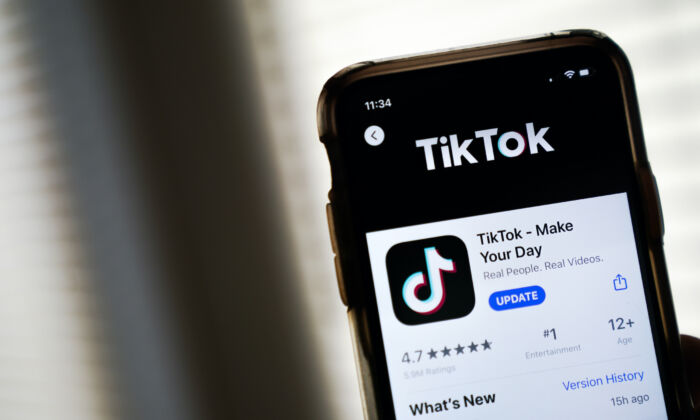 The download page for the TikTok app is displayed on an Apple iPhone in Washington, DC, on Aug. 7, 2020. (Drew Angerer/Getty Images)
Southern California

The TikTok trend encourages students to steal and destroy items in school restrooms. Damages reportedly cost Central Valley schools thousands of dollars in repairs. The Coalinga-Huron Unified School District (CHUSD) in Fresno, California, had to replace 41 soap dispensers in three days, with students even spraying red dye across the bathrooms.

“Students have been vandalizing our school bathrooms as part of a TikTok challenge. The vandalism is breaking soap, toilet paper, and sanitary product dispensers, and staining the toilet with red dye to make it appear like blood,” CHUSD Superintendent Lori Villanueva said in a statement to parents.

“Please let your child know that vandalism and stealing are not acceptable. Students who are involved will be suspended, and parents will be billed for damages and time to clean up the damage.”

The trend “devious licks” originated on Sept. 1 after a teenager posted a short video of himself and a box of face masks which he claimed to have stolen from school. The trend went viral after a number of similar videos appeared on TikTok.

These videos prompted students to steal their school’s soap and paper dispensers, toilet paper roll shields, and destroy restroom sinks, floors, and mirrors. Students would post their stolen items on TikTok, with a message saying they picked up a “devious lick.”

The primary group for this trend is middle and high school students. To curb this statewide trend, school districts are working collaboratively against this action by asking for parents’ help.

Glendora Unified School District (GUSD) urged parents to talk to their children about the serious nature of such behavior and encouraged them to monitor their children’s social media accounts.

“We ask that our families speak with their children about the serious nature of this type of behavior, as well as how these types of actions reflect individual and family values. We also encourage families to monitor their children’s social media accounts and discuss the consequences of taking part in risky, dangerous, or illegal social media challenges,” GUSD said in a statement.

A Los Angeles Unified School District (LAUSD) spokesperson told The Epoch Times that school principals and their supervision staff have received an alert to be on the lookout for suspicious behavior led by the trend and to continue to promote school-wide positive behavior.

“As a school community, we share the responsibility to maintain a safe and secure campus. I ask that you speak to your child about the seriousness of this type of unsafe and unacceptable behavior and I also encourage everyone to continue following the District’s message, if you see something, say something,” LAUSD said in a statement to parents.

By the time TikTok shut down the trend, the hashtag “devious licks” had more than 200 million views.

“We expect our community to stay safe and create responsibly, and we do not allow content that promotes or enables criminal activities. We are removing this content and redirecting hashtags and search results to our community guidelines to discourage such behavior,” a TikTok spokesperson told Insider.