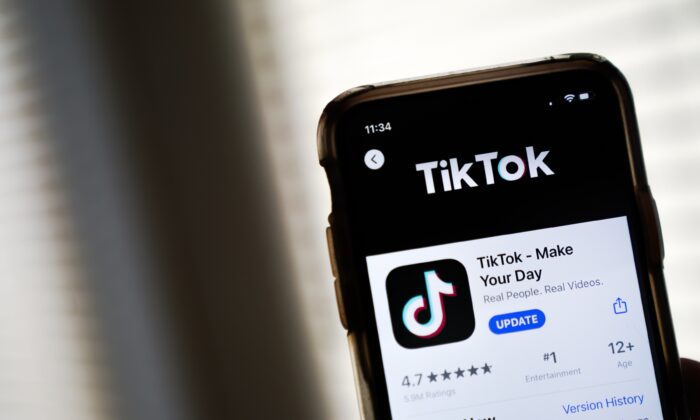 The TikTok app is displayed in the App Store on an Apple iPhone in Washington on Aug. 7, 2020. (Drew Angerer/Getty Images)
Opinion

TikTok has topped Google as the most visited website globally in 2021. The trend that short videos have become popular substitutes for books raises concern.

According to Cloudflare, TikTok topped the list for the first time in February 2021 and has remained No. 1 since August.

“In terms of access to and transfer of knowledge and information, this is great,” Zhang Yihe, a renowned Chinese author, told The Epoch Times. “But when it comes to the passing down of cultural heritage, it’s very worrying. All of our traditional culture and its precious cultural heritage will be lost.”

TikTok is a social media platform that enables users to view and share short videos between 15 seconds and three minutes in length. It’s owned and operated by ByteDance. TikTok was launched in May 2017 and became one of the fastest-growing social media apps in the world. It attracts people with its algorithm that recommends to users the kind of short videos it thinks they’ll like in a relatively short amount of time.

TikTok claims to have more than 1 billion monthly users. In an analysis of 60,000 households in the United States, the UK, and Spain, it was found that on average, children between the ages of 4 and 15 spend 80 minutes each day on TikTok. TikTok was downloaded more than 2 billion times in April 2021, and children are watching twice as many videos each day as they did four years ago.

“The change in teenagers’ reading habits does lead to some concerns,” Zhang said. “There’s no way around it. If you ask how many people can read and understand ancient texts and see how many people can really appreciate the beauty of Chinese calligraphy—very few. But there’s no point in complaining because the society is becoming more and more digitalized. No one can change the trend. Something—I mean culture—will always disappear, and it’s often the finest parts.”

The content that TikTok recommends to its users is “highly personalized” and “non-stopping.” An investigation by The Wall Street Journal found that TikTok’s algorithm can quickly draw minors into an endless stream of content about sex and drugs. To an account registered to a 13-year-old, TikTok offered 569 videos about drugs, cocaine, and methamphetamine addiction, as well as promotional videos for the online sale of drugs and paraphernalia.

In addition, transgender advocates are posting promotional materials on social networking services that are seen by millions of young viewers. Some parents are concerned that TikTok, which became the most downloaded app in the UK in 2020, is contributing to a “social contagion” that’s increasing the number of youth who self-identify as transgender.

Wang Peng, an artist from Beijing, told The Epoch Times that TikTok’s algorithm lures users into an addictive trap.

“It’s like you are stuck in a loop within TikTok. That’s why many people say that TikTok challenges the privacy of users’ internal thoughts and interests,” he said.

“It encourages our brain to fall into long-term entertainment. People are used to being on the app for a long time each day, it [becomes] a habit. This is addictive, like smoking or other addictions,” he said. “One is spending a long time passively watching videos rather than concentrating for a relatively longer time or thinking actively. This is bad for the brain, it wastes your time and reduces your analytical skills.”

TikTok is a threat to children, according to Niall Ferguson, senior researcher at Stanford University’s Hoover Institution.

“TikTok is optimized for user engagement, algorithmically steering users to content that will hook them via its ‘For You’ page,” he wrote. “In essence, the AI learns what you like and then gives you more of it. And more. Future historians will marvel that we didn’t give our kids crack cocaine, but did give them TikTok.

“[TikTok] is the opium—a digital fentanyl, to get our kids stoked for the coming Chinese imperium.”

According to Wang, TikTok is like “a software implanted in your mind to achieve a temporary amusing and entertaining effect. Like a form of indirect control.”

However, Zhang still has optimism for the preservation of traditional culture.

“Not all parents in China are so ignorant,” she said. “There are always parents who will let their children read Li Bai and Du Fu [renowned poets], look at paintings by Xu Beihong and Wu Guanzhong. The short video is there, but it cannot conquer all of China.”