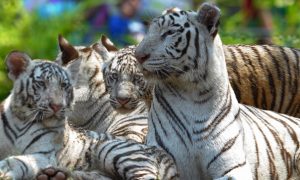 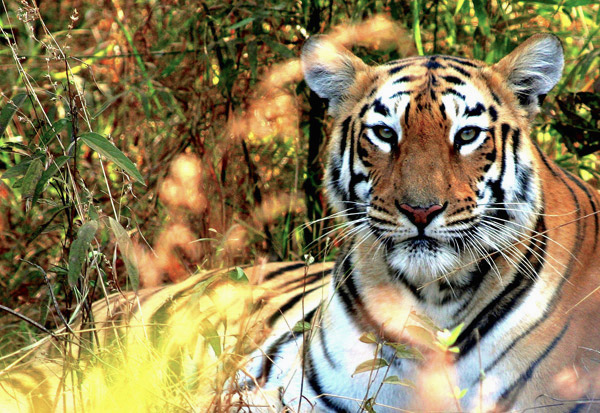 This is the second part of a four-part series examining trends in Protected Area Downgrading, Downsizing, and Degazettement (PADDD).

In India’s central state of Madhya Pradesh lie 500 square kilometers (200 square miles) of protected land demarcated as the Panna Tiger Reserve. The Reserve has the dubious distinction of becoming entirely bereft of Bengal tigers (Panthera tigris tigris) in 2009, seemingly without anyone noticing, and then subsequently hosting a remarkably successful tiger reintroduction program.

While Panna has faced many battles since it was set aside as a tiger reserve in 1991, including the sheer embarrassment of being declared tiger-free (common consensus: rampant poaching, see suppressed facts), it could always rely on at least one thing on paper, if not in action: its status as a Protected Area. Recently, however, even that definition has been questioned and global-scale analyses show that Panna is far from being alone among India’s Protected Areas (PAs).
Across the world today, large swathes of land that once enjoyed government recognition and protection are being downgraded, downsized or even degazetted (relinquished of their status entirely) in a phenomenon termed PADDD. Despite scores of people fighting for the institution of PAs, it turns out that once granted, PA status does not necessarily ensure protection forever. A Protected Area is deemed to be “downgraded” when the scope or number of human activities within it increases. Across the Indian subcontinent, protected areas have faced an overwhelming number of attempts at downgrading over downsizing or degazettement, according to PADDDtracker.org, a WWF-sponsored agency that monitors protected areas worldwide for changes. Although Global Forest Watch, a repository for deforestation and tree cover data, calculates that 707 thousand people are directly employed by the forestry sector in India (data from 2011), only 15.5 percent of the country is forested – compared to China’s 19.8 percent, 31.6 percent in the U.S., or 53.9 percent in Madagascar. Of this already-low forest cover, only 62 percent consists of primary forest, the rest being regenerated or planted. With nearly four times the population of the U.S. (1.3 billion people) subsisting within a landmass only 35 percent as large, India’s challenges are distinctive and worth worrying about, particularly from the point of view of its wildlife and forests.
Today, 510 PADDD events have taken place across India’s PAs, of which 95 percent are downgrades. Due to a lumbering bureaucracy and judicial system, changes are slow to be enacted, and verifiable data on affected areas is unusually hard to come by. Only in three of these PADDD events are their land area extents known, summing up to a paltry 526 square kilometers, which is convincing evidence that the true number should be considerably higher. Interestingly, although only two percent of these events are due to downsizing of PAs, they have resulted in the removal of protection for nearly 7,793 square kilometers (3,009 square miles). Perhaps the most remarkable statistic of all is that 98 percent of all recorded PADDD events (since the year 1900) took place within the last decade alone. Panna’s Jewels – Diamonds or Tigers? After a Special Investigative Team of the National Tiger Conservation Society exposed the complete lack of tigers within the Panna Reserve in 2009, there was a significant uproar both by the media and experts alike. Almost immediately, permission was granted for two female tigers to be moved into the reserve from neighboring Kanha and Bhandavgadh Reserves. Although the reintroduction program has resulted in 18 tigers in the reserve today in less than three years, it has taken an enormous effort on the part of park management to achieve such success. At one point, the Panna Tiger Reserve’s Chief Field Director utilized 70 park staff and four elephants to track and recapture the first male tiger introduced to the park after it unerringly began to make its way back to where it came from. Tigers have been diligently tracked, their cubs monitored, and sex ratios carefully managed to ensure the reinstatement of a successful breeding population.
However, Panna’s travails did not end with the extermination of its tigers. The Panna mines produce four types of high-value diamonds: the transparent “Motichul,” green “Manik,” light orange “Panna” and sepia-toned “Bansput.” In 2008, a Times of India article reported that a ban on diamond mining within the Panna Reserve by the Supreme Court had been lifted, overturning a 2002 ruling that mining was not permitted within protected areas. The court attempted to ameliorate the decision by instituting an environmental impact monitoring committee and a law that states that 5 percent of the earnings must go into a reforestation project. In 2010, the Reserve was refused a buffer zone by the Chief Minister of the State, Shivraj Chouhan. Most tiger reserves in India use buffer zones, which are regions encircling PAs that are somewhat protected, and which separate them from non-protected land.

“Humans are more valuable than tigers. One cannot destroy Panna and let just tigers survive,” Chouhan told national news channel NDTV. “What will they do with such a buffer zone? That is why there is no need for a buffer zone that can cause problems to Panna. No such buffer zones will be made.” The news report also alleged “several local political heavyweights and their associates have a stake in mines in the area under the buffer zone.” In September this year, however, the environment impact monitoring panel made a recommendation that the mines were to be completely shut down by 2017, citing that “mining activity in the tiger reserve and sanctuary will affect the wildlife, especially the population of tigers.” This announcement was met with an angry reaction from the National Mineral Development Corporation (NMDC), where an official responded, “How can someone assume diamond mines are disturbing tigers when big cats disappeared only when our mines were closed?” While the NMDC uses Panna’s history of poor management that resulted in the complete depletion of the Reserve’s tigers by poachers (for which nobody has yet been indicted) to strongly oppose the lifting of the ban, it is clear that the future of the Reserve and the tigers and other wildlife within it is besieged on all sides by multiple stakeholders. If the PADDDtracker is any indication of the future, India’s PAs will increasingly face bitter battles as the number of proposed downgrading events increase. With its burgeoning population and their demands placed on the limited space available within the nation, it is remarkable that large animals, with correspondingly large space needs, are able to survive at all. India is, however, the Bengal tiger’s last stand. Citations:

This article was originally written and published by Mrinalini Erkenswick Watsa, a contributing  writer for news.mongabay.com. For the original article and more information, please click HERE.

This is the second part of a series of articles, for the first original article on this topic, please click HERE.