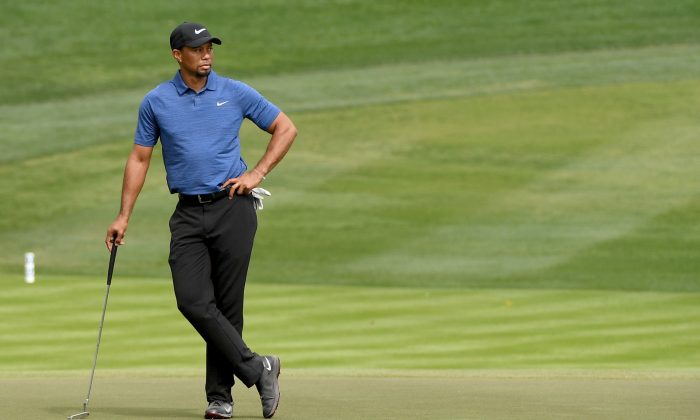 Tiger Woods on the ninth green during the first round of the Omega Dubai Desert Classic at Emirates Golf Club on Feb. 2 in Dubai, United Arab Emirates. (Ross Kinnaird/Getty Images)
Golf

Tiger’s Torment: Is Retirement Near?

NEW YORK—The news came matter-of-factly: Tiger Woods announced Feb. 11 he was pulling out of two PGA events he previously committed to playing. That included this week’s Genesis Open at Riviera in the Los Angeles area and the following week’s Honda Classic near his Florida home in the Palm Beach area.

“My doctors have advised me not to play the next two weeks, to continue my treatment, and to let my back calm down. This is not what I was hoping for or expecting.

“I am extremely disappointed to miss the Genesis Open, a tournament that benefits my foundation, and the Honda Classic, my hometown even. I would like to thank Genesis for their support, and I know we will have an outstanding week.”

Woods had been out of tournament action since August 2015 before appearing in the Bahamas this past December. Tiger indicated he was free of pain and announced an ambitious schedule—playing no less than four times in a span of five weeks. That ambitious schedule ended with just three competitive rounds played.

Tiger missed the cut at Torrey Pines during the Farmer’s Open—a venue where he won his last major in 2008 at the U.S. Open and where he previously won the annual tour stop no less than seven times. His play can only be charitably described as inconsistent. His continual inability to consistently drive the ball in play was a prime reason for a five-over-par 77 in the opening round on a South Course where he has previously shown to play his best golf. Woods fared better the next day on the easier North Course, but a 72 left him staring far outside the cut line for weekend play.

Woods then decided to take a 17-hour commercial flight to Dubai for a European event, which he has won twice previously. Tiger carded another 77 and unlike the PGA Tour event in La Jolla, Woods opted to forego the second round and head back home—citing back spasms as the reason.

It’s important to point out Tiger’s last PGA Tour win came in August 2013. In his last three majors played—which all came in 2015—he missed the cut. His last top ten in a major came at The Open Championship in 2013 at Muirfield when he tied for sixth.

In sum, Woods has been nowhere near any recognizable form and his status for the remainder of 2017 is now a serious question mark with no clear answer.

Woods has stated that he had plenty of accumulated rust and would need to play in a few events in order to assess his game and demonstrate a familiarity to a competitive environment. Makes perfect sense.

Just one minor detail—Tiger needed to show the capacity to play against the world’s best players. That has not happened and appears to be a good ways off.

No one knows Tiger better than his former teacher Butch Harmon and his comments to Sky Sports were telling.

“Are we ever going to see him playing at the heights he did back in the early 2000s? Probably not, but the main thing he has to do right now is somehow get himself healthy,” said Harmon. “He’s been off for almost a year and a half, and now he’s come back but he still can’t finish a tournament. To me, that’s not a good sign.”

The former NFL coach and Hall-of-Famer Bill Pascrell was famous in saying: “You are what your record says you are.”

Golf is a game of clear numbers and the ones Tiger has put forward show a golfer who still has been unable to demonstrate any sort of consistent play. Consider that Woods has withdrawn or missed the cut 11 times in 23 starts. Since back surgery in April 2014, Tiger has completed 72 holes only 9 times out of 19 events entered. This is the golfer who previously went nearly six years in which he neither missed a cut nor withdrew from an event.

Harmon added, “We all want to see him playing well again, but right now I’m concerned that someone I have admired for so long, and who I believe is the best player who ever lived, might not be able to play at any kind of level again.”

Those words—”any kind of level again”—are uttered by a man whose keen eye has counselled and taught many of the game’s best players.

Woods had planned to be on hand for the Genesis event since the first-year sponsor is aligned with the Tiger Wood Foundation with proceeds from the event going to the designated charity. The last time Woods had played at Riviera was in 2006 and the timing would have been 25 years ago in 1992 when Woods played in his first professional event at the storied club in Pacific Palisades.

Woods had planned to hold a mid-week press conference, but that was aborted on the advice of his doctors who said he should remain “horizontal” for as much as possible to alleviate back spasms that flared up when in Dubai.

The sad reality for many athletes—especially those who dominated for a sustained period of time—is that their inner self-confidence is what made them great to start with. During his peak years Woods demonstrated a resolute confidence in his abilities—fortified by an insatiable desire to win—often utterly vanquishing his opponents. To now admit his days as a top tier professional golfer is ending is a statement Woods is not prepared to make.

In many ways it reminds me of going to a Frank Sinatra concert just a few years before the legendary singer died. Observing the chairman of the board embarrass himself in not being able to remember the words to his own songs was hard to witness but even more so was the inability of Sinatra to finally see that it was long overdue for him to retire for good.

Denial is a major emotional response. Those who have attained levels far removed from others in their profession—simply believe what they did previously will simply continue.

Although chronologically Woods is 41, there are plenty of miles on those tires. Several surgeries have happened over the last many years.

Is Woods able to grind on, battling through the high scores and inconsistent play? That’s hard to say with certainty. Woods likely realizes—at least privately—if he can’t really play well enough to finish tournaments, never mind contending, retirement may be the best option.

During his last hiatus from the game, Woods mentioned how debilitating the pain was in his back—the inability to even walk at times. Tiger has gone through various swing coaches and his latest swing has shown a continual inability to be in the same zip code with too many of his drives.

Others in the game such as Ernie Els have stated a more positive tone suggesting that other players, such as Phil Mickelson and Vijay Singh, were able to win major events even in their 40s. But each of the two players had shown a much more consistent level of ability than what Woods has shown to date.

Which Woods Shows Up This Week? Tiger Paws or Pause

An athlete’s clock is not something that can be easily understood or estimated. Some have remarkable durability and can last far beyond what others are doing. Witness the success of 39-year-old quarterback Tom Brady of the New England Patriots. Brady had a stellar season capped off with his fifth Super Bowl triumph and has stated a desire to continue to play even in his 40s. For others like Arnold Palmer and Seve Ballesteros—their last major golf wins came in their early 30s—with the promise of more majors to come. None did. The spigot had no more major championship water to give.

Woods stated his early 2017 play was meant to get him ready for the first week in April at Augusta National and the Masters. Frankly, Woods is no where near ready to compete against the world’s best unless he has the physical and mental strength to both practice and compete regularly. For any athlete to admit the end is upon them is an admission none ever willingly concede. Smashing barriers has always been the mantra for elite athletes. Realizing that day is no longer can never be easy, given the passion and will to win was born at such an early age.

The torment Woods is facing is in dealing with reality not fantasy. Tiger has never been comfortable in really being honest about key elements in his life—witness the spectacle he endured during his painful admission about being a serial cheater against his then wife Elin.

He has a very tight coterie of insiders and has often fed the media and public a predictable name, rank, and serial number approach whenever interviewed. There’s no question much of the larger sports world would like to see him return, but is Tiger able to accept his play when he needs a compass to find his next drive? No athlete can stall forever the relentless march of time or the cumulative nature of injuries.

The thing about sports is that there are few athletes who exit on their own terms. Yes, the sports world marvels in watching someone like Roger Federer win the Australian Open for his first major in five years and becoming the second oldest winner of a slam in the Open era of professional tennis.

Woods likely sees something of a similar sort happening for him. But unless compelling competitive evidence is shown, it’s time for professional golf to move on—without Tiger.