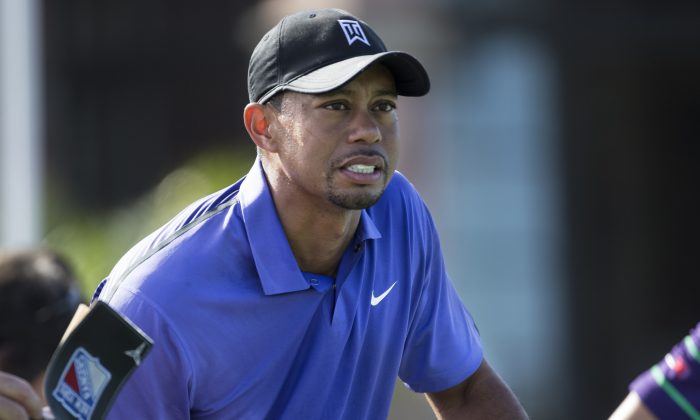 The on again, off again saga of Tiger Woods continues. Does he have the resolve to overcome the worst he has ever played professionally? Can he once again scale the heights of the golf world? (AP Photo/Willie J. Allen Jr.)
Golf

NEW YORK, NY—The core of any athlete rests squarely on the passion he or she supplies to the sport they play. Talent is no doubt central to the discussion but if the performer has lost passion to compete—the will to apply the long hours and grueling attention to various details—then frankly the game is over.

This past Wednesday Tiger Woods announced via his Website he’s taking a break from professional golf, “and when I (Woods)  think I’m ready, I’ll be back.”

Much has been chronicled concerning the free-fall of Tiger Woods. The former world-number-one player has now fallen to 62nd in player rankings—his worst position since October 14, 1996, just two months after he turned professional. Woods missed the cut at the Waste Management event—his first full field event in 2015 since missing the cut at last year’s PGA Championship. At the Scottsdale event Woods posted an 82—his highest round ever as a professional and his adventures with the short game would be comical if the stakes weren’t as high as they are.

Last week in San Diego Woods was back on familiar ground, Torrey Pines, the scene of seven past wins as well as his last major win at the ’08 U.S. Open. Woods pulled out after 11 holes, claiming stiffness in his back but his play was simply lacking across the board. For the first time in his career Woods missed cuts in back-to-back PGA Tour starts. So much of Tiger’s explanations have also become labored to the point of ridicule. When attempting to explain his poor play he delved into nebulous word-speak claiming his “glutes shut off.”

The Masters, the game’s first major of the year, is roughly 8 weeks away and unless Woods shows an immediate return to something near his top-tier form, the likelihood is Tiger will not fare any better at Augusta National. The probability of him either missing the 36-hole cut or pulling out prior to the conclusion of the first two rounds seems to be a fairly predictable route until he shows otherwise. In his last nine appearances, Tiger has missed three cuts, had three withdrawals citing injury and finishing 69th, tied for 25th and tied for 80th.

Now that Woods has said he “won’t return until his game is improved” one has to square earlier comments when he opined that playing more events would get the rust off his game and allow him to feel the moments that only top-tier competition can bring about.

The legendary great golf champion Bobby Jones was famous for saying there is huge difference between golf as a recreational game and the one played under tournament conditions and that one should not in any way link one with the other. How much will Woods gain from isolating himself is anyone’s guess.

Woods still plans to compete in the Honda Classic in less than two weeks which is near his Florida residence although he indicated his final decision to play there will be based on how he sees the state of his game. Confused yet? So much of the Woods style is based on the innate skill in providing answers that never really demonstrate clarity. Unless Woods does play in the Honda event he will not be playing the following week’s event at Doral because his world ranking is not among the top 50. The Miami event is the first designated WGC event of the season and the host facility—the famed “Blue Monster” at Doral—is where Tiger has won multiple times. The only other likely location for him to tee it up is at Arnold Palmer’s Bay Hill Invitational—another site where he has won multiple times in the past.

The 2015 golf landscape is a far cry from the golf scene which Woods stormed to the top for much of his golf career. Younger stars have emerged and given the reality that Woods has not won a regular PGA tournament since August 2013, it’s unlikely there’s much fear or intimidation being shared by the top-tier competitors.

Tiger has not won at Augusta since 2005. His 39-year-old body has clocked plenty of miles and while Woods is not remotely hinting at simply retiring from professional golf, there’s been speculation that continuation of his woeful play could prompt such a consideration. In golf annals it is not unheard of for greats to have walked away from the game at peak form. Jones did as much after winning the Grand Slam in 1930 citing competition fatigue and the great Byron Nelson did similarly in the late 1940’s not long after earning enough money to pay for his lifelong ambition of having a large ranch in his home State of Texas. On the female side top champions such as Lorena Ochoa and Annika Sorenstam have also followed that path—albeit because of a desire to start a family.

Does He Still Have the Drive?

After Woods failed at the event in Arizona, he mentioned to the press that he would be flying immediately home to Florida and start putting in the needed time to sort out his chipping flaws and other swing breakdowns. Soon after getting back to Florida, Woods decided to fly across the Atlantic and head to Italy and watch his girlfriend Lindsey Vonn compete. He did so again before going to San Diego when visiting Vonn competing—this time in Colorado. In addition, Woods has two young children and his desire to be with them only serves to place more of a time responsibility as a father in concert with his other collective priorities.

Passion is the oil of champions. It drives the engine and keeps everything in motion with unrelenting precision. The laser-like focus Woods commanded when at his finest—the desire to squash all rivals—was all consuming and utterly thorough. Competitors melted simply from an introduction at the 1st tee.

When Woods returns he will again step into a caldron far deeper than the abyss that Daniel saw in Biblical times. In years past he was the emperor—the figure of supreme confidence with a will to win that was second to none. The emperor has now been exposed and has no clothes. Does Woods have the will to battle on, to provide one last final push in his race to the top of the golfing heap? Tiger is a man of many contradictions but if his poor play should persist, I say to him move off the mountain and rest comfortably in what you have accomplished in the past. Nothing was worse than seeing Frank Sinatra attempting to sing many of his finest recordings but because of old age forget the words when performing.

Understand the former and value the latter.