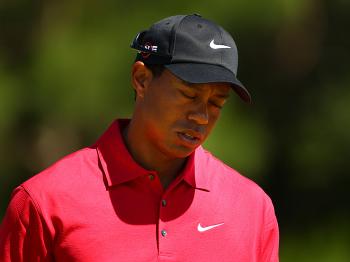 Tiger Woods reacts to his missed putt on the second green during the final round of The Players Championship at TPC Sawgrass on May 9, 2010 in Ponte Vedra Beach, Florida. (Richard Heathcote/Getty Images)
Golf

By James Fish
Print
Tiger Woods withdrew from The Players Championship golf tournament after completing only six holes on Sunday, due to an injury to his neck.

Woods walked off the course after his second shot on the seventh hole and headed for the locker room, where he spoke briefly with reporters. From there he went to the physical therapy trailer, where he stayed for half an hour before getting into a black SUV and being driven off.

The No. 1-ranked golfer said he had been nursing his neck since before the Masters in April. “"I've been playing through it," Woods told AP. "I can't play through it anymore."

According to pgatour.com, Woods said his neck hurts on his "backswing, downswing, and follow-through." "Setting up over the ball is fine," Woods explained, "but once I start making the motion, it's downhill from there."

Aside from the pain in his neck, Woods complained of a tingling sensation down his right side to his fingers.

Woods said he might have a bulging disc in his neck. He will be getting an MRI next week.

Woods had been rolling his neck between shots all weekend, but no one connected it to a possible injury, or his poor performance in the last two tournaments.

Woods has not withdrawn from a tournament since the 2006 Nissan Open at Riviera, when he had the flu.

No. 1 Ranking at Risk

Tiger Woods has been ranked No. 1 in the world for 258 consecutive weeks, and 598 weeks in his career, but that reign is at risk because of his shaky play and his five-month layoff. If he misses more tournaments, while his nearest competitor, Phil Mickelson, continues to play well, Mickelson could replace Woods at the top of the rankings.

Mickelson finished the tournament 7-under, well behind the leaders. Woods had been 4-under when he withdrew.

On November 27, Tiger Woods was involved in a much-publicized driving accident, in which he ran his SUV over a fire hydrant and into a tree near his home in Isleworth, a gated community in Orlando, Florida. Police at the scene found Woods lying semi-conscious outside the vehicle with lacerations to his face.

The 33-year-old golfer was treated and released from a local hospital. No mention was made of neck injury at that time, but Woods told a press conference at Augusta before the Masters that he had “a busted-up lip and a pretty sore neck, and that was it."